Fringe-First winner Joe Sellman-Leava’s one-man show Monster debuted at the Edinburgh Fringe Festival this summer, and since then this exploration of masculinity, violence, and anger has gained a whole new relevance in a post-#metoo world. Joe is currently getting ready to tour Monster again in 2018, so we caught up with him just before he started re-rehearsing, and asked him how he was finding bring it back to life.

How is your preparation going for Monster next year?

Pretty well thanks! Posters and flyers have gone to print, and I’m working on the new draft ready to go into re-rehearsal in January. I’ll also be brushing up on some boxing training soon, as well as running my lines again (and again!), as there’s been a bit of a break from it since Edinburgh. 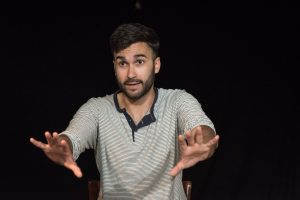 On that note, how are you finding coming back to the show after a few months away?

I took Monster to a venue in North Devon quite recently, in November. It was the first time I’d performed it since the recent sexual assault allegations against various high-profile people had emerged, which were then followed by the cascade of stories of the #metoo campaign. The show itself and the responses and discussion afterwards felt very different in light of all this, given that it explores masculinity and violence, the kinds of men who are celebrated in society, and the expectations around gender roles. The sheer number of people who have come forward with stories about sexual assault have made all of us wrestle with the toxicity of certain male attitudes towards women, so it has been a bit different coming back to the show now.

It feels like there’s a greater responsibility to find constructive ways of moving forward, and I think part of this is education and discussion. Worklight have often held post-show discussions after our performances, which work well given the unique way theatre can provoke conversation between strangers. I also wanted to do something more targeted alongside Monster, so I’m planning a series of workshops in each of the towns and cities the show is touring, aimed at young men. These will incorporate some of the exercises that the Great Men Project use in schools – encouraging honest, peer-led discussion to challenge ideas about masculinity and work towards gender equality.

When you were first working on Monster, what inspired you to write the piece? What do you want audiences to take away from it?

The inspiration came from working on a play about domestic violence, and being unable to find male voices on the issue – with the sole exception of Patrick Stewart’s article in 2009 about growing up with a violent father. At the same time, I was watching a documentary about Mike Tyson, and also reflecting on some of the relationships in my life, how different men deal with the emotion of anger, and prevailing attitudes around gender and masculinity. The play’s form comes largely from how I was thinking about these things at the time – that both individual and societal attitudes to these things are messy, complex and often contradictory.

I’d like audiences to come away thinking and talking about what they’ve seen, hopefully with some new insights and questions. All of us have to wrestle with the darker sides of our nature at times, and men in particular don’t have a good history of talking about this. I hope that the show can lead to some constructive conversations.

How has doing the show – both as performer and writer – made you reconsider your masculinity in your own life?

It’s led me to reflect on how we could (and should!) try to reshape masculinity into something that inherently promotes and celebrates certain ideas – like positive consent and emotional honesty – and rejects other, more harmful ones (like unwanted physical contact, or not actively listening to female colleagues). For a long time, I think a lot of men (including myself) have thought “we’re already doing this, individually, so I’m not part of the problem.” But clearly all of us can and should be doing more, or we wouldn’t still be seeing these problems on such a vast scale.

It’s also made me realise how resistant all of us can be to change, especially when that means adjusting or challenging ideas that you’ve held without question for most of your life. I think one of the reasons there’s been a nasty backlash against the push for gender equality is that a lot of men feel threatened by it: if you perceive masculinity in a certain way, and this forms a key part of your identity and behaviour, then a challenge to this might feel like a personal attack. It’s probably easier for men my age to question some of these ideas, and be open to change, but there are clearly a lot of – often very powerful – men whose ideas and actions have gone unchecked for decades.

The show deals with some dark subject matter, and it can be quite an intense experience for audiences. But there is also a fair bit of humour within the play, and some lighter moments to counter-punch the darker parts. As much as it is a play about specific issues, it’s also a really engrossing story, with memorable characters and some narrative techniques that can only work in theatre.

Monster is touring the UK from 12th January – 22nd March 2018. Dates and ticket information below: