Review of: Daisy Pulls It Off

A gloriously ripping take on girl's school literature that is a perfect alternative to panto for the Harry Potter generation. A lively, spirited cast displays perfect comic timing, topped by Anna Shaffer as Daisy - the supreme schoolgirl heroine.

I really must be careful. Giving away the slightest hint of a plot-spoiler for this perfectly spiffing production could have me labelled a sneak by the “babes” of the Second Form and “sent to Coventry” before “brekker”. Daisy Pulls It Off, first performed in 1983, is Denise Deegan’s comedic take on the girl’s school literature of the likes of Angela Brazil, and has been energetically revived by Go People under the direction of Paulette Randall. Set in 1927 at a girl’s coastal boarding school, Grangewood, it describes the plucky adventures of Daisy, the new girl in the Upper Fourth, who seems to have it all. She can sing like an angel, comes top of the class in Geography and, having previously only read the rules in a book, rises to the hockey team 1st XI in double quick time. 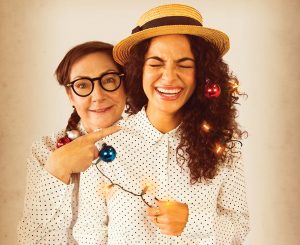 The problem is, Daisy is the daughter of a former-opera singer fallen on hard times, whose husband disappeared during the war. Having been at a state elementary school, she is the first girl to win a scholarship to Grangewood, and as a result is victimised by the snobby, cruel and controlling Sybil and her hench-girl Monica. Fortunately for Daisy, the prank loving Trixie takes a shine to her and together they strive to thwart the efforts of their over-privileged fellows to discredit her. Added to this there is an element of mystery: where did the late owner of Grangewood hide his treasure, which if it could be found, would save the school from being sold? And just who is the mystery gardener who says so little, but constantly whistles a Welsh tune?

In an effort to “play up and play the game” as the girls insist, I should not disclose much more of the plot, but this production really comes into its own in the second act. A critical hockey final is choreographed to perfectly capture the sporting drama without losing any comedy, and a cliff-top rescue scene in a high wind is portrayed with a brilliant use of a limited set of strewn chairs and flapping skirts.

From the outset we are immersed in school life, with the audience treated as proud parents attending the performance of the fourth form play. There is some need to get over older women playing the roles of schoolgirls, but this is part of the play’s tradition and adds an anarchic element to events as the actors slip between parts. Shobna Gulati stays just on the right-side of overdoing both the ever-so humble mother of Daisy and the dastardly Sybil, and Clare Perkins shows great comic timing as Monica and the mysterious gardener – whose moustache develops a role all of its own. The real star here however is, Anna Shaffer as Daisy. Like Daisy she is a woman of many talents: she can sing and her portrayal of the plucky heroine is pitch-perfect.

Picking Daisy for revival at this time of year is a stroke of genius. Rather than being an antidote to panto, it is a ripping way to start the festive season, and will appeal to all ages – both those who spent their childhood engrossed in the adventures of schoolgirl heroines and the Harry Potter generation. Not an easy feat, but the Park theatre has pulled it off.