Review of: The Box of Delights

An alternative Christmas show that sees John Masefield's mystical 1935 children's novel bought imaginatively to the stage by an ensemble of talented performers.

The faded grandeur of Victorian Wilton’s Music Hall in east London is a perfect fit for this re-imagining of John Masefield’s 1935 magical Christmas tale The Box of Delights. With a running time of 2 hours 40 minutes, including a 20-minute interval, this is a proper night out at the theatre and older children will delight in the occasion. 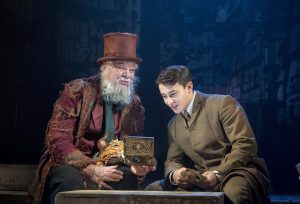 Matthew Kelly and Alistair Toovey in The Box of Delights at Wilton’s Music Hall
©Alastair Muir 05.12.17

Mathew Kelly takes the lead playing both the good and bad magicians – Cole Hawlings and Abner Brown – who are fighting over control of the magical box of delights. He adds just the right amount of “panto acting” to get the laughs without over egging it. Three children get swept up in the battle – orphan Kay Harker, played with great earnestness by Alistair Toovey and his cousins Mariah, played with gusto by Safiyya Ingar and Peter (Samuel Simmonds). Gun-slinging, pirate-loving Mariah gets some of the best lines in the show: “The only parties I like are in basements with jazz and men wearing makeup” and “what is the point of having a box of delights if we can’t delight in it?”

The story is loaded with twists and turns and the incredibly wordy script (by children’s author Piers Torday) is often hard to follow. I delighted in the moments when they stopped talking and broke out into haunting choral song or into set pieces of physical theatre (aided by Simon Pittman’s movement direction). The occasional use of puppetry and video art also helped make the story more engaging for the younger members of the audience. Particularly magical was a glittering puppet of a phoenix, designed by Samuel Wyer, that took flight to a chorus of “ahs” from the audience.

Ed Lewis’s music and sound design is superb, and left me wanting more. Several notes of the 1980s BBC theme tune are used to stir the memories of audience members who were around at the time, and we get enough Christmas songs to make us feel this is a festive show (although the Christmas day that ends the production feels a bit of damp finale, given all the build-up).

All in all it is an enjoyable evening’s entertainment, although it lacks pace at times and the first half feels overly long. If you are bringing kids with you it is best if they are heading out of primary school or in secondary because there are some threatening scenes that younger audience members may find frightening and they may lose concentration in the wordy parts.