Review of: The Sex Worker's Opera

This boisterous, joyous piece falls more under the umbrella ‘political art’ rather than plain ‘theatre’ – a slightly ramshackle whirlwind through the trials, lives and political leanings of those onstage. The Sex Worker’s Opera focusses entirely on giving these so-called ‘invisible’ people in society the chance to tell their stories, fighting against the stereotyping and victimization they encounter from public and personal acquaintances alike. 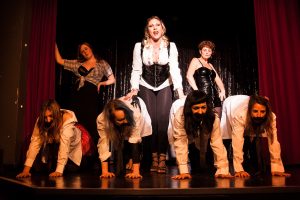 However, the tension between wanting to give everyone a voice, thereby showcasing as much as possible and yet create a tight piece of theatre is rather clear within the piece. The entire show could do with a colossal trim, and some moments especially suffered from a marked lack of clarity, not allowing the audience to understand the emotional state of those performing and therefore lessening the impact the stories had. The central plotline of a sister trying to convince her sibling to stop sex work was lazy – exploring the points against sex work would have leant much more credence to when the ensemble put them down, and asking someone to walk onstage six times during the show with apparently no variation in lines each time quickly becomes irritating.

Nonetheless, this is a fine piece of ensemble work dedicated to fighting against a stigma engrained in society for centuries. If you like your evenings frank, sexy and with a decent dollop of wry humour, then The Sex Worker’s Opera is the one for you.