Review of: The Retreat at the Park Theatre

Sam Bain makes his writing debut in this witty comedy

Having been someone who voraciously consumed Fresh Meat, Peep Show and adored Four Lions during his formative years, the chance to witness a Sam Bain (co-creator and writer on the aforementioned) stage debut was a tantalising prospect. Alongside a starring role The History Boys and Doctor Who alum Samuel Anderson, all the pieces were set for a rickrolling comedic farce.

A shame, therefore, that The Retreat did less to live up to the sum of its parts than would have been hoped. Bain certainly fills his show with witty asides, but, compared to his screen work, seems to lose something pivotal in writing for the stage.

We meet the trio of central characters on the side of a Scottish mountain, with two figures in his life converging on protagonist Luke (Anderson)’s small cabin. Luke is a sex addict, a grieving divorcee and a man desperate to find both himself and relief. He assumes, at first, that a path of spiritual enlightenment through Buddhism is the solution. His older brother Tony (Adam Deacon), believes salvation is through alternative occupations, chiefly narcotics and alcohol. Completing the set is Buddhist follower Tara (Yasmine Akram), who, while seemingly aiding Luke’s internal rehabilitation, has more duplicitous motivations at heart.

There’s humour here, and Deacon, of the three, gets his laughs with ease, sliding into rebuttal after rebuttal without a moment’s pause. Anderson’s Luke, the foil to Tony’s antic-driven disposition, holds the centre ground as the straight-laced middle-class gent facing a raft of modern-day afflictions, so consumed by his problems that he rarely has a chance to see how self-centred he can be. Akram gets the shorter straw between the fraternal sparring, but acquits herself well in giving Luke a genuinely torn affliction. 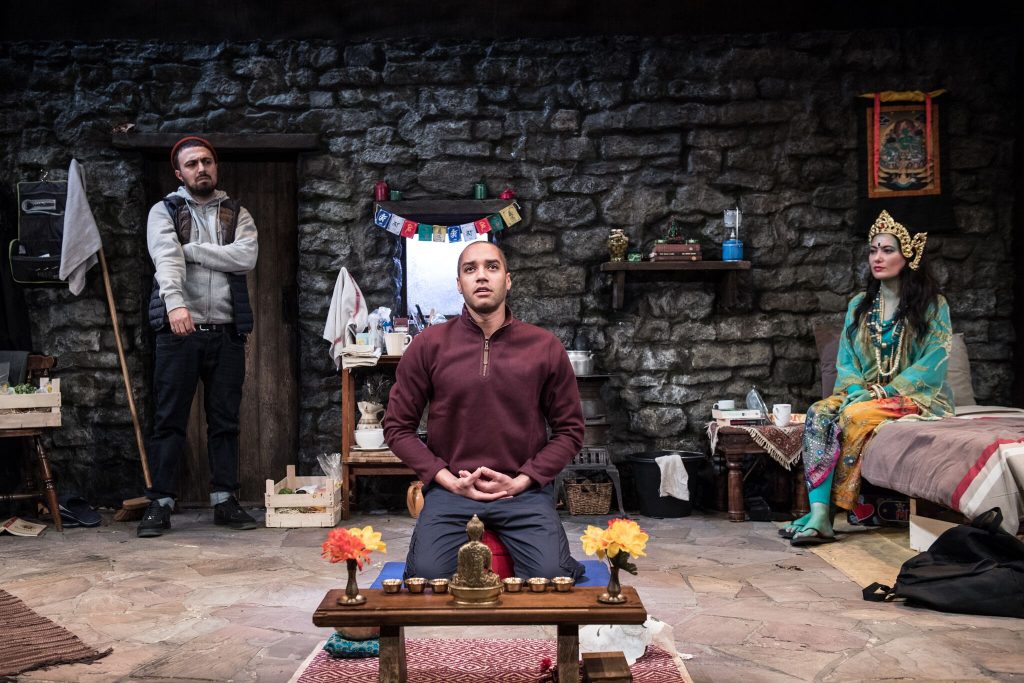 In a way, the show has much of an identity crisis as its central protagonist. Bain pulls back from the farce-like comedic aspects, ready to indulge his thematic explorations further where necessary. The drama saps the comedy just as the comedy saps the drama. There is a debate here, about how far belief really does gratify our need for purpose, and to place one’s life entirely within a belief system is to do so at the expense of the self. Losing yourself to faith can often not be so far from losing yourself during a high.

There are no real answers here, only more wit, and for a writing debut, Bain has certainly hit onto a succulent and hypocrisy riddled issue. But the play lacks the intimate awkwardness and cringe-inducing power of his TV work, and for , hat it felt somewhat anticlimactic.