Most ticket buyers of this sold-out stage version of Paddy Chayefsky’s 1976 Oscar-winning film Network will have booked to see Bryan Cranston (aka Walter in Breaking Bad) make his UK theatre debut. And they won’t be disappointed. Cranston’s rendition of depressed TV news anchorman Howard Beale who becomes a ratings sensation after calling bullshit on national television (in response to a firing because his ratings were too low) is a theatrical tour de force. He makes the journey from tired to depressed to “mad as hell” and out the other side to prophetic and zen-like as though he were playing King Lear. In his acting he holds on to the truth amid a production that offers us image overload, just as his character tries to do in the chaos of ratings wars and political instability. 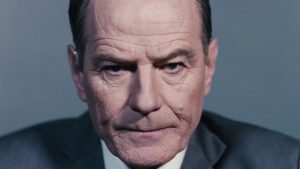 As you take your seat in the auditorium of the Lyttelton Theatre the stage is already alive with activity. The space has been transformed by designer Jan Versweyveld into a working television studio with a glass box of a control room on one side, and a working restaurant on the other. The couples in dark clothes sipping wine at the 20-odd tables are not low-paid supernumeraries, but instead audience members who have signed up for the “Foodwork” package – a five-course meal and close-up view of some of the more intimate scenes in the show that are performed alongside them. It is a manifestation of one of the play’s central themes, the blurring of fiction and reality; we get to witness real responses to fictional encounters.

The sheer number of people on stage at any one time in Ivo Van Hove’s production; combined with cameras offering us filmed images of different parts of the set, the audience and at one point of a scene taking place outside of the theatre, along with plenty of archive footage from 70s America means there is a cacophony of images on stage that is sometimes hard to watch. Despite having Cranston in the flesh just 10 metres away, our eyes are instead drawn to the close-up on the cinema-sized screen at the back of the stage, teaching us the overwhelming power of the screen to suck our attention.

Lee Hall’s script is tight, if somewhat wordy, and he manages to retain the best of the film, while reapportioning “air time” to the various plot-lines. The affair between Beale’s old friend and colleague Max Schumacher, played with great empathy by Douglas Henshall, and the cold television exec Diana Christensen, played with steely ambition by Michelle Dockery, provides a welcome variation in pace from the guns-blazing high energy of the TV studio. And the excellent short scene between Shcumacher and his wife, played with great sincerity by Caroline Faber, gives us a much-needed slice of simple human interaction. There are also plenty of one-liners to break the tension: “We’ve had 900 calls complaining about the language, so what the fuck are we going to do about it,” says an irate network boss (the f-word is peppered liberally through the script, as is the phrase “goddamn”).

Tal Yarden’s video design is stunning, if verging on sensory overload, the multiple portraits in the “mad as hell” scene gave me goosebumps.

If we are left in any doubt that Beale, as the “angry prophet denouncing the hypocrisy of our times”, can still speak to us today there is a postscript to the show in which we see the inauguration of all the presidents since the film came out. Obama gets a cheer from the audience, Trump gets a boo. I am sure as prophetic as Chayefsky’s film was, he would never have imagined a future where a reality TV star became president of the US.

Network is running at the National Theatre until March 24 2018. The show is sold-out, however tickets are still available through Day Seats and Friday Rush. at www.nationaltheatre.org.uk