Review of: Mother Courage at the Southwark Playhouse

Price:
From £16
Reviewed by: Alex Wood

Rough around the edges, but an important piece 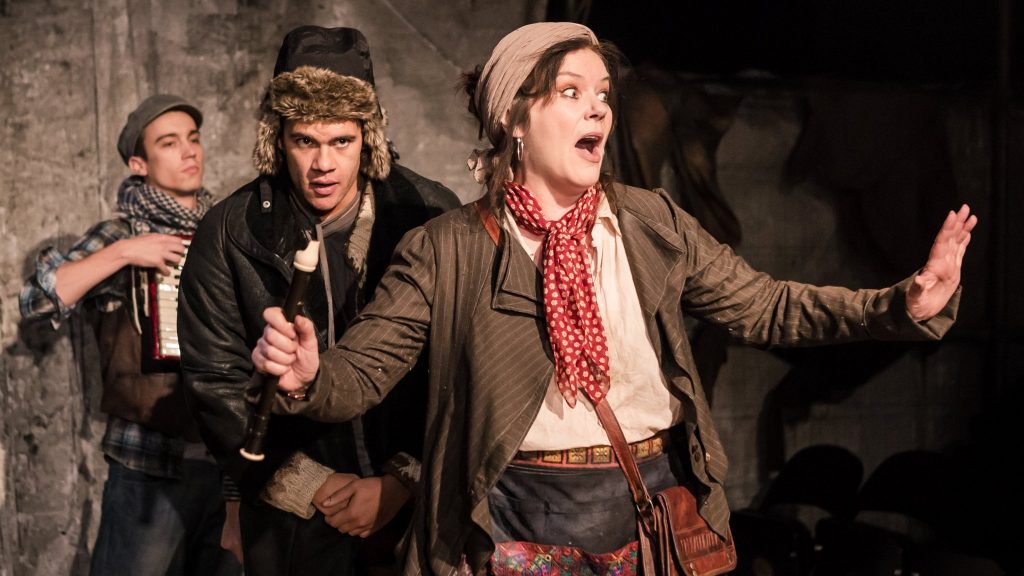 Adaptations of Brecht’s Mother Courage (a text often revered as one of the greatest plays of the last 100 years) are usually judged by their ability to not slide into an epic bore for their lengthy runtime. This is a toughy – at over three hours, any misstep or badly placed moment can derail an audience’s attention, while the show needs a tour-de-force central performance as the titular cart-merchant to keep the investment and energy high.

In that respect this version of the show, directed by Hannah Chissick, gets a lot of things bang on the money. TV and stage veteran Josie Lawrence, for starters, makes a fantastic protagonist and assumes the role of Courage with an earnest drive, capable of seeing a playful side to the dreary Thirty Years War that Brecht chose as the backdrop to his meditations on the nature of battle and conflict in society. Tony Kushner (of Angels in America fame)’s 2006 adaptation also keeps the dialogue accessible, fluid and punchy, turning Brecht’s 12-year plotline into a series of snapshots, of flitting fancies and dialogues, steadily rising to a crescendo for the conclusion.

More to it we, as an audience, are constantly aware that Mother Courage’s decisions may not be the best for her children, that she is a dubiously motivated individual earning a living on the whims and tides of war. Courage has to go where the war goes, and flog her wares to those in difficult circumstances. It’s an empty, amoral world and a repellent one to be in.

But the production is let down by Chissick’s construction of the play as a whole, and her grasp of the piece as more than simply a set of ‘moments’. Tempo and pacing, as well as the integration of actor musicians, all feel slightly off, while the absence of percussion sometimes means the musical interludes felt abstract, untethered and not really all that valuable. The ensemble’s assumption of chorus roles also felt abrupt, and the integration of these exposionational moments never felt as natural as they could have been.

Few performances stand out with the same dynamism of Lawrence’s, but there is some fantastic work from Phoebe Vigor, who commands the show’s most startling scene deep into the second act. It’s lucky that this pair are the ones granted the most stage time, and deservedly so. Barney George’s traverse stage is equally efficient and versatile, leaving Courage placed on some perpetual, unending road that simply goes on and on.

Danielle Tarento has mustered up a fine production here, one that reminded me personally of Sally Cookson’s La Strada which ran at The Other Palace earlier in the year. While Strada  may have been the punchier and more refined of the two, both made for a blistering examination of a world ravaged by war. Courage is an important show, if slightly rough around the edges.