An unnerving bilingual version of Barlett's office-set dystopia, functioning both in spoken English and BSL

Mike Bartlett’s Contractions has been given a radical overhaul in this version by Deafinitely Theatre, the UK’s only professional deaf-led company. Creatively integrating British Sign Language into the piece and thereby making it accessible to both hearing and D/deaf audiences might at first seem like a daunting task, but (as ever) director Paula Garfield manages with style and aplomb. 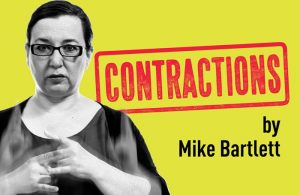 Contractions is known to most as Bartlett’s dystopic office-based two-hander, following employee Emma’s increasingly menacing interactions with the spookily-titled ‘Manager’ – in this production communicating entirely in BSL. Fifi Garfield acts as a wonderful corporate husk for whom sales figures might function as lifeblood, presiding over the office with a steely detachment, unflinching in the face of Emma’s distress. Anything that might be lost from not hearing the exact words is gained in a different form – explicit signings of sexual intercourse, which would be hugely lewd or immature in a hearing context, become uncomfortably sterile and exploitative when enacted by Garfield’s Manager. The chunks that are entirely BSL, not verbally parroted by Abigail Poulton, reveal a reality that is hugely familiar to D/deaf audiences – having to follow a plot through atmosphere and gestures, not being able to understand the exact words used.

Poulton therefore spend much of the time functioning as a translating machine; using BSL alongside her spoken lines and repeating Garfield’s lines for the benefit of the hearing audience. While this didn’t usually affect her acting ability at all, there were times when having to carry this responsibility impacted upon the subtlety of the situation. This became especially clear in the last scene, Emma’s quasi-lobotomy being shown in a very black-and-white, robotic way that slightly undermined the tragic humanity of the of the entire previous hour.

Setting the piece in ND2’s office structure became an interesting choice, paralleling the real world with the corporate world of the play well but (at the same time) providing a stark contrast between the naturalism of the real office against the stylized nature of the piece. In a theatre one can suspend disbelief to the point where the audience accepts that the fictional world outside the walls of the set functions under the same rules as those onstage. Within this office environment, however, the differences between the world onstage and the real Euston office became bigger and bigger the further we progressed into the piece, therefore making the play seem more ‘fictional’ than it would have in a traditional theatrical space. Thought-provoking, definitely, and a piece that requires a decent mulling-over on one’s way home.