An exquisitely crafted story told via subtly interlinked vignettes in barber's shops, across 5 cities in Africa and Peckham in London. A play of great humour and high energy, that is moving and heart-warming without shying away from the difficult issues, including politics and mental well-being.

For some of us a visit to the barber’s is a purely functional exercise where, at best, the level of discussion might hit the heights of holiday destinations. However, for five communities in Africa and one in the UK, the barber acts as much more. In Inua Ellam’s new play, they become a place where men can share their hopes, fears, frustrations and vulnerability. They are venues for social interaction, with a backdrop of music or live football but further, almost psychotherapy centres, allowing an outpouring of emotions that societal convention does not allow elsewhere. 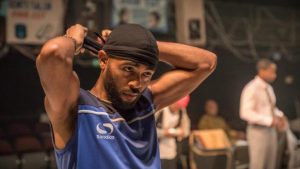 The action takes us around Africa, from Lagos, to Accra, Kampala, Johannesburg and Harare, with a visit to Peckham after each vignette. The play takes place on one day with the story unwinding as each shop first discusses, and then listens to or watches, Chelsea vs. Barcelona in the Champion’s League. As the stories develop we realise that all the shops or the clientele have some relevance to each other. Samuel is working in his father’s barber’s shop, The Three Kings, in Peckham, under his father’s former partner, Emmanuel and with the Jamaican, Winston. The working day is, on the surface all banter and bonhomie, but under the surface Samuel is simmering over his imprisoned father’s treatment by Emmanuel and the absent Elnathan. On each return to the Brixton shop we learn a little more about the characters and their back-story until the tension reaches boiling point with revelation and a degree of reconciliation.

The route takes us through a great many themes, not least those of the old dismissing the views of the young. Both young and old struggle with the legacy of poor paternal relationships, and they are in danger of making the same mistakes. Perhaps the over-riding theme is that of the difficulty in finding a place to discuss such issues, and the fear of being seen as either weak or troubled. This play does not, however, shrink from raising the debate around the political backdrop. It would have been impossible to have any action in Harare without covering the difficulties of life under Mugabe, and the dialogue has been carefully adapted to include recent changes. Similarly, the plight of South Africa also features, and a lengthy rant, which starts out being about a father, quickly becomes a tirade against the Mandela regime’s failure to seek justice for the black population.

Many of the actors take on multiple roles with great success and there are some standout performances from Fisayo Akinade as Samuel, and from Hammed Animashaun, who manages to be a nervy Nigerian job applicant as well as an edgy streetwise urban cool Londoner. As ever with the Dorfman Theatre the set is a star in itself with a great use of space, light and music. This is an exquisitely crafted story where the strands are all subtly interlinked. The tales are all told with great humour and pathos and ultimately come together in a moving and heart-warming finale. At the outset there is apparently great chaos as the arriving audience is invited into the barbers chairs and to interact with the players. However, this is carefully orchestrated and readily settles into the movement across countries that happens in great style; with singing, music and dance. By the close of the evening the energy and excitement again becomes unrestrained and the curtain calls become a prompt for more dancing and audience interaction. This is complete entertainment.