Price:
From £8
Reviewed by: Antonia Windsor

A delightful piece of children's theatre featuring an array of puppets, music and song. It tells the tale of a giraffe that was sent from the Pasha of Sudan to the King of France in the 19th century, drawing on themes of migration, identity and belonging.

What a delightful production this is! Clapham-based Omnibus Theatre have teamed up with Islington’s Little Angel theatre to produce a magical children’s show full of puppets and song. Based on the eponymous picture book by Dianne Hofmeyr and Jane Ray, Zeraffa Giraffa tells the true tale of a giraffe that was gifted by the Pasha of Egypt to King Charles X of France in the early 19th-century. 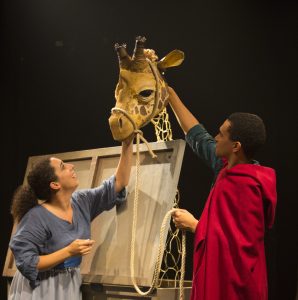 In this theatrical retelling the story starts in Ethiopia where baby Zeraffa (played very convincingly by a toy giraffe) gets separated from his mother and father (slightly bigger toy giraffes) and subsequently captured and taken on the back of a (toy) camel to Khartoum. It is a dramatic opening, particularly when actor Nadia Shash, who takes over the playing of Zeraffa for that scene, cries out for her mummy while struggling against the captor’s ropes and later sings a mournful traditional song.

The whole story is told by a tight ensemble of three, Shash, Ashton Owen and Andre Refig, who take on the entire cast of characters and show great musical ability; singing traditional Egyptian and original songs and playing instruments including a guitar, kazoo and accordion. They are also master puppeteers, operating a great range of puppets to help tell the story, including a very beautiful life-size baby giraffe, that has the whole audience saying “ahh” at once.

The simple set magically transforms to a marketplace in Khartoum, a boat on the river Nile, the waterfront in Marseille and the palace and Jardin des Plantes. Little boxes open to show some of the pictures from the book as the giraffe journeys through France, among them a field of paper poppies and the town of Lyon. Projections allow for shadow puppetry and maps, while a large canvas transforms from the desert to the sail of a ship.

At the centre of the story is the loving relationship between the giraffe and 12-year-old servant boy Atir who is charged with accompanying Zeraffa on the journey, played with great sensitivity by Owen. The show also touches on issues of immigration and what it is to be a stranger in a new land.

The show is aimed at children from the age of four, but my 18-month-old was absolutely delighted by the puppetry and music.

This show is running at the Little Angel theatre until 4 Nov and at Omnibus Theatre from 25 November to 17 December. https://littleangeltheatre.com, https://omnibus-clapham.org