Review of: Romantics Anonymous at the Sam Wanamaker Playhouse

There’s something both momentous and mournful about witnessing what will be Emma Rice’s final production as artistic director of Shakespeare’s Globe. Fitting for a musical based on chocolate, the show (adapted from the 2010 French film, Les Emotifs Anonymes) is simultaneously intensely sweet and, as a result of its circumstances, bittersweet.

Romantics Anonymous is smothered with the cocoa-based stuff. From the first scene, where the audience is requested to eat a small piece, through to the various chocolate-factory themed crises that the script contains, we can’t escape from this confectionary obsession. It’s a handy literary tool – chocolate is a flexible symbol representing, at various points of the show, care, sweetness, perseverance, endeavour, excitement, passion. It truly is a versatile subject matter, and Rice dishes it out in spades.

We follow a love-stricken couple, Angelique and Jean-Pierre, forging a romance while also saving a chocolate factory from ruin. Angelique, the dictionary definition of shy, is incapable of mustering the courage to talk to large groups of people, while Jean-Pierre is afraid of any commitment or change, to a point where his entire livelihood is on the brink of collapse. Through their love, their messy, complex love, they find some sort of détente during their battles with anxiety. 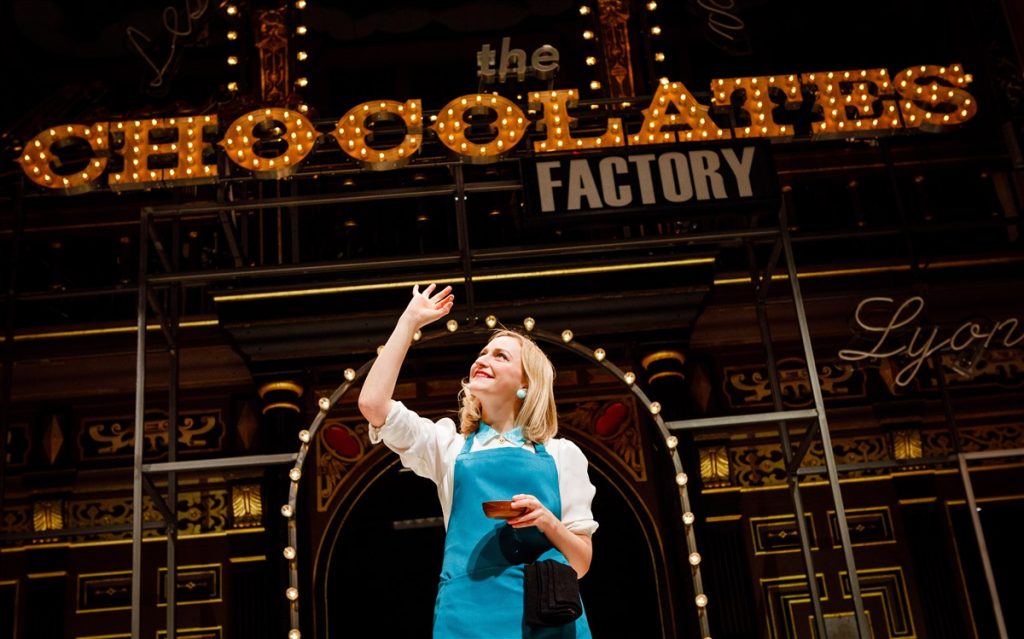 All within the intimate confines of the Sam Wanamaker Playhouse, this is a succulent treat of a production. The walls bleed a heartfelt warmth, a musty quaintness that ripples through the production. While some elements may sometimes feel almost sickly sentimental in places, the show is carried along by the glib humour and fabulous energy provided by an ensemble cast. Carly Bawden and Dominic Marsh may head up the central pairing with the suitably awkward chemistry (less will-they-won’t-they and more will-they-please-just-get-on-with-it-already-before-my-heart-melts), it is the remainder of the cast that pulls out the stops, giving this brew its fizzing pop. Special plaudits must go to Marc Antolin (reuniting with Bawden after Twelfth Night) for stealing most of his scenes, as well as the murmuring stylings of Gareth Snook. The list of whimsically humorous moments is endless.

But the show is, after all, a musical, and the work done by Christopher Dimond and Michael Kooman on lyrics and music must be commended. A personal favourite may be the boundlessly effervescent Quelle Surprise at the beginning of Act Two, which Joanne Riding effortless glides through with style, while another perfectly choreographed restaurant scene was as hilarious as it was innovative.

But this is a loving parting gift from an artistic director who clearly cherished her time at the venue. In a way, chocolate is an apt way to describe Rice’s tenure – fleeting, intensely sweet and leaving a warm glow once consumed. Catch Romantics before it melts away.