Review of: Reasons To Be Cheerful

Gloriously anarchic piece based around renditions of iconic punk rock.

Reasons To Be Cheerful has been doing the rounds for a while now – one of Graeae’s success stories, alive since 2010 and still very much pumping away. Based around music by Ian Drury and the Blockheads, the story follows Vinnie and his best friend Colin frantically trying to get to a gig of a lifetime and ending up dragging boss’s ex-girlfriend Jeanine and terminally ill Dad along for the ride. 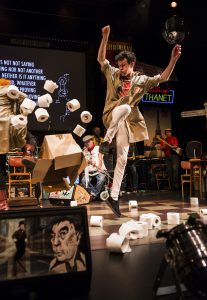 The structure of the show is inspired – set in a creaky local pub, a group of friends have gathered to pay tribute to Bobby (Vinnie’s Dad, who died a couple of years previously) in re-enacting the above tale. They hoot, jeer and often decide to stall the onstage action with some punk classics – ‘Spasticus Autisticus’ and ‘Reasons To Be Cheerful Part 3’ (of course) included. This framing narrative provides a glorious opportunity to smash any pretence of a fourth wall to smithereens. Vinnie (beautifully portrayed by Stephen Lloyd) introduces us one-by-one to all the characters onstage – including Wayne ‘Pickles’ Norma on live audio-description, set firmly within the narrative under the pretence of describing the scenes on the phone to his mate that can’t be there. This seems to be one of director Jenny Sealey’s specialities – integrating accessible ways of storytelling into the narrative of the piece and not just tacking it on in an afterthought. Captioning and BSL are treated in a similar way, but their aesthetic integration comes as a cost. Switching between the projected ‘lines’ of what I suppose should be called the ‘play within a gig’ and the BSL supported conversation of the people in the pub was sometimes tricky to follow, as there was no visual cue when the switch occurred – expecting the slide to change one wouldn’t notice the BSL starting, thereby constantly missing the start of the pub sections.

The acting is phenomenal throughout, with the cast gaily consuming pint after pint, clapping and cheering along with an energy that would put many other shows to shame. Wonderful music that, while somewhat shoehorned into the actual plot, lends the piece a gloriously gig-like atmosphere. Stephen Collins is fantastic as Collins, and Kat Spicer quietly heartbreaking as Pat, Bobby’s long-suffering wife. However, with a show like this, where the emphasis is obviously on giving people with disabilities a voice, it becomes difficult to know how to judge the piece given the lack of diversity in other areas. A cast that is overwhelmingly white, and a script where the main female character (although given a wonderful depiction by Beth Hinton-Lever) is completely defined by her relationship with men is not ideal. All we discover about our heroine Jeanine, apart from her interactions with Dan and Vinnie, is that she ‘likes art’.

Given the strength of diversity in other areas, this criticism is not intended to be biting – the theatrical employment record of disabled artists is dire, and an area in which Graeae are not so much leading the pack as dragging everyone else along by the scruffs of their necks. Reasons remains a fierce, anarchic two hours held up by a phenomenally talented cast and crew – 7 years later, one can see why it still remains as relevant as ever.