A touching and at times hilarious account of what it is to be single and looking for fulfilment, when all around you have already settled down. David Eldridge's new play is alternately uncomfortable and heart-warming, with perfectly observed performances from Justine Mitchell and Sam Troughton.

Every relationship has to start somewhere – the more important issue is: how long will it last? In Beginning, Crouch End (the heart of the “pesto triangle”), two people are alone at the end of a flat warming party in the early hours of the morning. One is the hostess, Laura (Justine Mitchell), a stylish, successful woman in her late thirties. The other, Danny (Sam Troughton), a man in his early forties, has just met Laura, coming as a guest of a man that she has little time for. The situation seems obvious; Danny is loitering because he feels he has a chance of spending the night with Laura, whose behaviour suggests that his hopes are well placed – even to Danny, who confesses that he has no “radar”. So far, so standard; a situation that could happen at the end of any party featuring single adults. However, there is a nagging discomfort, why would Laura, polished and sophisticated, with seemingly everything going for her, be taken with a somewhat disheveled “Essex-boy” who lives with his mother and “nan”? 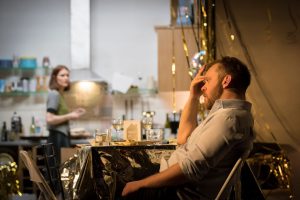 As the dialogue develops we initially feel that the motivations are just animal lust – but we soon learn Laura and Danny are, in different ways, damaged. Danny is divorced with a young child that he never sees and has not slept with a woman for four years. It seems that while professing his keenness to sleep with Laura, he will do almost anything – drink more, tidy up, dance, make a meal – to avoid intimacy. This, we feel is going to be a tough seduction for Laura. However, she is not about to give up, for her motives go beyond just wanting sex and someone to spend a Sunday with. Laura wants a child.

What develops is a gently comedic, but at times heart wrenchingly touching portrayal of two people struggling to come to terms with being single and (effectively) childless, at a time when they yearn for companionship and fulfillment. David Eldridge’s wittily pithy dialogue succeeds to keeping us enthralled for almost two hours, helped by two perfectly observed performances that have us willing the couple into a situation that could make them both happy, against all probability. The staging in the Dorfman, together with Polly Findlay’s direction, works well for such an intimate play, helping us to empathise with Laura and Danny rather than feeling uncomfortable voyeurs. This is a play that will have great resonance for a wide audience.