The Bunker theatre is a fitting venue for a new play set on the railway tracks, bounded as it is on all sides by major train stations and lines. 31 Hours, the sophomore effort from Kieran Knowles, is set in what is best described as a Network Rail Zen garden. A quartet of concrete cuboid bollards punctuate a carpet of ballast stones, which are fondled by the actors in moments of cogitation or hurled in moments of indignation. 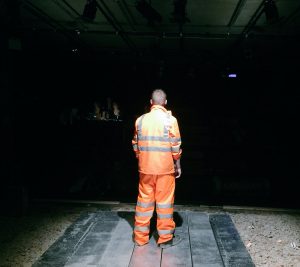 Four men in Hi-Vis PPE uniforms inform us of their jobs as cleaners. And each job is on the clock. A 75-minute clean-up is a record. To call them cleaners however seems to do them a disservice. They clean up after those annoying ‘passenger incidents’ on the tracks that cause delays to your commute. The dirt they clean up is us – human beings revealed in all the messiness of their matter. No longer bodies, arms, or heads but gunk, gloop, and slime. People who have reached a crisis point in life and want to end it quickly yet give little thought to the aftermath. Something that happens with the alarming frequency suggested by the play’s title. The men bear witness to the expiration of someone who moments before was alive as they are.

Who were these people? The cleaning squad helpfully act out the biographies they imagine each victim to have had before their untimely end. From a damaged young man to an impoverished old couple, from a wealthy solicitor to a child’s accidental fall. Procedural elements of their job, office banter, and workplace hijinks fill out the rest. The rapid-fire dialogue shared between the ensemble is cute at first but quickly becomes irritating. The constant zing-zing of lines and abrupt scene transitions meant that the emotional heft of any one of the group’s story is undercut. We’re told humorously of the rough categories that the victims fall into; jumpers, platform crawlers, bouncers, wingers, and most difficult to clean, poppers. A water balloon used to ‘theatrically’ illustrate this felt remarkably tasteless.

As the play notes the majority of suicide victims in the UK are males 18-59, particularly working class males; not coincidentally the exact demographic of the foursome. Why are so many young/middle aged men killing themselves? Using these men as a lens to explore modern manhood is a novel idea but this worthy premise is underdeveloped.

The off-handed quip ‘man-up’ directed at the newest recruit prompts a fiery philippic from a man confused at his place in the modern social and economic order. Neither able to comfort his partner in the delivery room nor fully commit to a job which drains him rather than providing a sense of purpose. This was another opportunity to dramatise the contemporary crisis of masculinity; the men, laconic at the best of times, are left adrift in the touchy feely world of head office. With its patronising HR dept. and ineffectual workplace counsellor. The pressures of low pay, late nights, lack of equipment, and timed jobs would be enough to send anyone into a tailspin. But shouting impotent monologues at the audience generates more heat than light.