An interesting if slightly flawed exploration of Keats's early life

The Old Operating Theatre – a winding museum just next to London Bridge tube station– is Europe’s only surviving operating theatre, and therefore acutely suited to this dissection of Romantic poet Keats’s early life. Angus Graham-Campbell’s new play, Rebel Angel, focusses on charting Keats’s gradual movement from promising surgeon to rather more downtrodded poet. And, my goodness, is it a gorgeous space. Climbing up a tiny, spiraling staircase we’re led through the museum itself, exhibiting the instruments students like Keats would have used in these primitive operations – firmly establishing the period even before we even enter the theatre itself. However, despite the obvious, glorious parallels that can be drawn between such an operating ‘theatre’ and the thespian ‘theatre’ variety, the venue also provided some difficulties that somewhat hindered dramatic communication. Large parts of the action were obscured by the bars and wall around the ‘stage’, and although the lights and minimal sound (designed by Matthew Evered) were spectacularly used to conjure a sense of space and place, the constant skipping in time and place wasn’t made easier by the constraints of the venue. 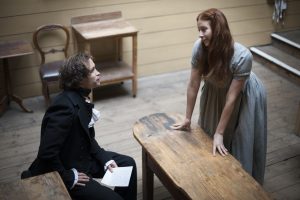 John Keats is mostly convincingly portrayed by Johnny Taylor, although one feels that he has a tendency to lapse into the stereotypical at points of high drama. Peter Broad is (as ever) fantastic, with sterling backup by a young, continually multi-rolling ensemble consisting of Fred Fergus, Tom Palmer, Max Marcq, Theo Peters, Ben Holbrow and Polly Edsell. Most of these character changes stayed clear enough, but there were sections where the sheer amount of changing names onstage confused the action of the piece. Focusing the story to provide an in-depth dissection of a couple of specific relationships might have served the piece better than trying to portray all of Keats’s interactions, however gamely the actors switched between accents and costumes. This also meant that a large amount of the surrounding characters can only be described as two-dimensional, with the female roles especially not being given any time to develop – despite being given laudable treatment by Edsell.

Despite this, the piece was confident enough to let the spectacular surroundings speak for themselves, instead choosing to nail the detail with period costumes. A potential issue with creating a play along this vein would be the lack of dramatic tension in the conclusion of the piece – I assume everyone in the audience was complete aware of the outcome of Keats’ final decision, and his following subsequent inclusion in the Romantic British canon. This is, however, beautifully managed by Graham-Campbell, who uses Keats’ uncle to hit the audience with questions that resonate strongly, even in today’s world. Is it worth throwing away a promising career as a surgeon and the ability to save people’s lives to commit to writing poetry? The drama of the play hinges on this question (even though we are aware of Keats’ response), and it’s a shame it only gets properly vocalized and explored late on in the show – especially considering the intricacy and layers that exist within the argument.