First off, I should warn that I am rather a voracious gin drinker. The combination of cabaret, my tipple of choice and some rather juicy historical facts therefore ticked all my boxes before I even entered the space; however, the combination of Libby Wood and Maeve Marsden and their croony sultry gloriousness tipped me right over the edge. 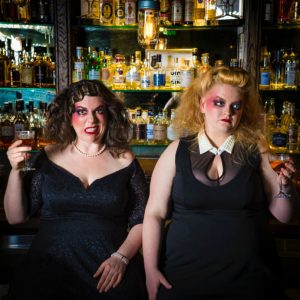 The charisma of both performers is relaxing and yet infectious. Jeremy Brennan acts as a wonderful counterpoint to the duo, but the main focus is always on the two stars – and rightly so. Sweat-and-glitter-slicked Wood and Marsden are an absolute joy; Wood’s voice in particular is like wrapping yourself in glorious buttery swathes of maple syrup, oozing around the space in the most delicious way. Marsden also, despite the slight rasp that seems to be a common post-Fringe-plight, is equally delightful, and the two quickly establish the rapport between themselves and the audience.

This is a show built on the success of the adlibs of the three performers – swigging bottles of alcohol hidden in cleavages in a sort of never-ending gin-producing frenzy, the piece would falter without an intensely strong, almost personal connection between spectator and spectated. Often this is hugely successful– a malaria-stricken version of Peggy Lee’s Fever being a particular highlight (Wood is utterly fantastic) as is the rousing end number ‘I DRINK ALL THE GIN’ (caps mine). However, a couple of sections do fall bizarrely flat, such as a slightly odd rendition of Two Ladies (Jeremy Brennan in a starring role). Oddly enough for a late-night show, the sections which work best are the historical pieces – Two Ladies with its ‘gin threesome’ was funny but didn’t have a large amount of relevance to what was being discussed. The history of the tipple, as well as the show’s skew towards female involvement/victimisation in this, is absolute genius. It transforms what could be a rather shallow piece into one which has a huge amount of heft, combining historical dates with a beautifully sarcastic take on the ‘female role’ throughout the past.

This is a glorious piece – not without faults, but more than made up for by the wit and talent of the three onstage. Sadly this was their only night in London, but it’s definitely worth a trip around the country to catch.