Review of: The Man Upstairs by Patrick Hamilton

A strong cast bring a sense of mystery and tension to one of Patrick Hamilton's less well known plays.

The Southwold Summer Theatre is bringing their successful season to a close with this engrossing, quality production. Written by Patrick Hamilton and directed by Phil Clark, The Man Upstairs resonates with the manners of post war Briton. The play exposes an obsession with threats known and unknown as it confronts the fear of conflicts – both those past and those yet to come. 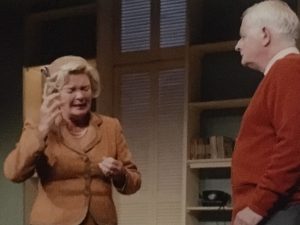 Costumed and styled by Miri Birch with an elegant set design by Tory Cobb, this seasoned Southwold cast unfold the 1950s mystery play (which may leave you slightly flummoxed at times) with continually committed performances. Hamilton is, after all, the man who gave us the psychological thriller Gaslight as well as the intriguing Rope (turned into a classic film noir by Hitchcock) so he does have form – even if it is not entirely evident here.

The play captures a sense of the social changes occurring post war. There is growing affluence for some but with crime seeming a better option for others. Civilian life has settled – people eat out, they visit the countryside and new technologies are developing in Britain’s new peacetime, however it is the social order that really fascinates. Old school Sir Charles Waterbury and the put upon George Longford are both ex military but, awkwardly, it is George who has to rent rooms from Sir Charles. Then there is the aspiring Moon Gang with an eye on a new life in the colonies, intending to make it any way they can without deference to class or position.

The play revolves around the quiet bookish existence of Mr. Longford (played with a real sense of angst and confusion by the redoubtable Jim Morley) whose life is turned upside down by a surly intruder, Cyrus Armstrong. Darrell Brockis brings a delightfully heightened edge to his performance as Cyrus Armstrong – threatening, challenging and cajoling his lowly victim. His eyeballing, sneering and questioning of Longford’s every remark creates a threatening mystery, and here Brockis excels.

The tension of the opening scene is ably maintained and developed by the excellent Barbara Horne. As Mrs Armstrong she is both moving and amusing, weaving a web of deceit about her son Cyrus. She sweeps in with such urgency and conviction thta she gives the piece an authority and a dynamic that enliven the entire production. Despite the slightly bizarre plotlines (Mrs Armstrong manipulates Longford into believing her son is fixated on him, out of his mind by the cycles of the moon) and to the entire cast’s credit, they play the piece with such vigor and commitment as to make any tenuous plotting seem both mysterious and alarming.

This might not be Hamilton producing his best work but it functions as an interesting archive piece, bringing post war Britain into focus – the little man finding a voice against the baying militarists and standing up for himself. Hamilton manages to both remind us of the insecurities of the period as well as entertain us with the comic side of the antics of the Moon Gang. Some areas of it might seem improbable but The Man Upstairs allows us to pause and consider the plight of all those who felt duped, confused or let down by their war experiences and consider the social impact as post war society redefines itself.

In the hands of a less talented company this play might wane but here it is delivered with flair and wit. Running until September 8th  leaves you still with a chance to catch this mystery – it really is well worth a visit.