Love, sex and death, the holy trinity for writers. Stephen Clark seized them all with his Le Grand Mort, a brimming concoction of rumination, prospective copulation and abscession. And for the most part this was a juicy feat, and Clark lets the topics froth sumptuously. A well-cooked treat.

We alight on Julian Clary’s Michael, a suave, sometimes garrulous individual who mulls over the intrinsic sexuality of religiousness (and vice versa). Diana, Tutankhamun and Rasputin coalesce in an opening monologue, as Clary prepares a puttanesca (“spaghetti in the style of a whore”) in a lavish, stainless steel set (a functional kitchen and mark of expert interior design from Justin Nardella). His companion, Tim, a smooth turn from James Nelson Joyce, enters the house as a prospective sexual partner, muddying the waters somewhat, dissecting and blowing Michael’s suppositions out of the water. 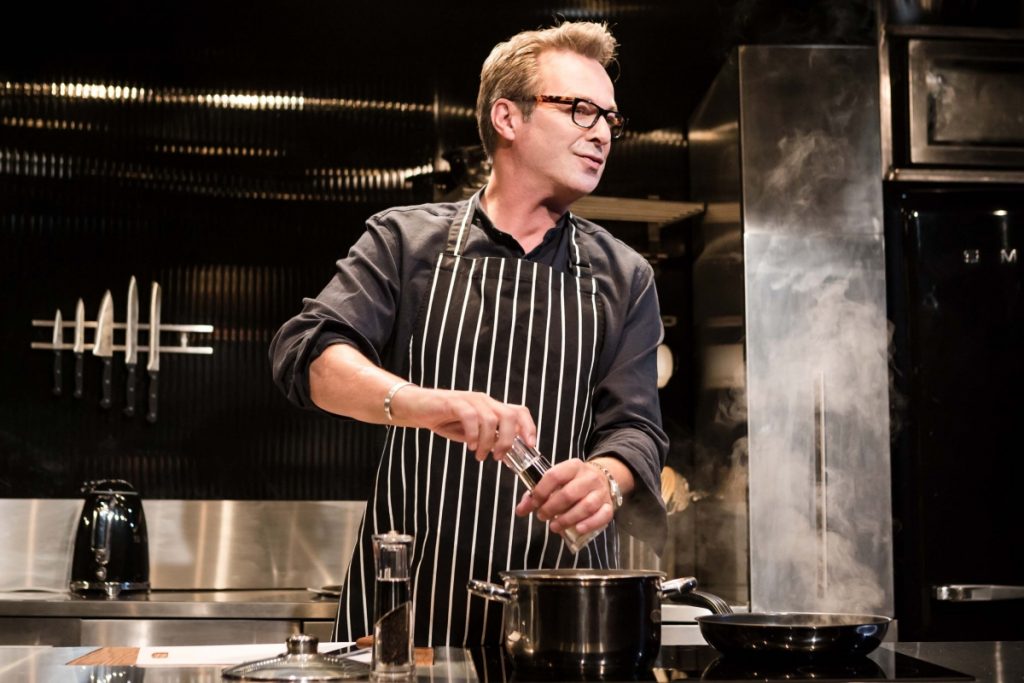 Both actors acquit themselves reasonably, mastering the recesses and whimsies of Clark’s script with enough ease to seem vaguely natural. Some of the lines, delivered often to the audience, draw huge laughs (“If this doesn’t shock you then I’d not want to see your porn collection. Or maybe I would…”). This is not an easy text, and at times it feels as though Clark was firing from the hip when he constructed it. The philosophising is sprawling, at times it is far more grating than intriguing, especially once we find out that the young Tim essentially craves death, returning to the oblivion he believes that he has come from. For him, life is meaningless – so for us as audience anything he says feels equally redundant unless it alters his perspective. The dialogue overshadows the characterisation.

Director Christopher Renshaw turns a domestic environment into a versatile miasma of discourse, with enough movement to rarely feel static. At one point the central kitchen island is almost transformed into a morgue’s slab at one stage through fluid acting movement. Nardella places a huge Vitruvian man absently to the side of the stage, somewhat distracting though eventually a central tenet of the conflict. More problematic, unfortunately, was Ed Lewis’s sound design, often far too overbearing and removing some of the tension from the delivered lines in the smaller confines of Trafalgar Studios 2. Altering the levels or changing the timings may have been effective.

But what of Clary’s performance? Sweating buckets, especially as Nelson Joyce reveals every ounce of his being, the entertainer gives an understated yet admirable performance. It was strange to see such intimate vulnerability so explicitly on show, and even if sometimes Clary’s tone fell into a slightly wooden monotony.

An intriguing and heady mix, the show felt something like a homosexual response to David Ives’ Venus in Fur – the young and elusive youngster coming in and quaking an elder to the core (though this time with an explicit exploration of how maternal love can explode into lustful physical connection). 90 minutes of messy intrigue, though a worthwhile evening at the theatre.