Review of: Fever Pitch at the Union Theatre

Set in the grand surroundings of the Union Chapel, this operatic re-imagining of Nicholas Hornby’s novel Fever Pitch seems everything that opera is stereotypically not – riddled with swearwords, integrating members of the community and (crucially) about football. The wild chanting of footie crowds might seem a bizarre subject to marry with an operatic style, but Highbury Opera Theatre pull it off with style and panache. 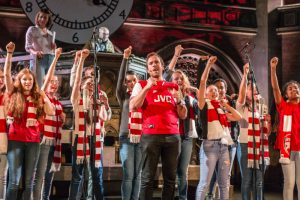 This version of the famous novel works so well onstage due to the integration of the ‘laddishness’ associated with football culture and the way it is played off against the operatic style. There are actually many parallels to be drawn between the two styles of music – the sheer force and passion in the music being the distinguishing factor here. Robin Bailey stuns as Gooner, with equally strong voices and acting from the rest of the professional part of the cast – Robert Gildon, Nick Allen and Joanne Harris. Marrying these two different musical styles is also a glorious way of integrating a large, non-professional cast and using their skills to the advantage of the production rather than attempting to push them to fill a certain mould.

This isn’t to say there weren’t issues – sometimes the volume made words hard to understand, and the staging tended towards the stationary. I understand that fitting such a wonderfully large choir onstage can present certain issues, but sections where there were less bodies to fit in the space might have been improved by slightly more action on the stage. The setpiece itself was so wonderful that it was a shame it was not used more than a couple of times, and would have added visual drama as well as movement on the stage. However this is just a minor problem, and certainly didn’t detract from the impressiveness of the project and the majesty of the final piece.

It is a wonderful thing, seeing opera not just confined to the red and gold arches of the Royal Opera House, including and integrating professionals, amateurs and the children’s choirs of the area. Projects like these create the future of opera – children and families that experience it as a friendly, dramatic art form that can function within communities and bring people together. Sadly the future of arts education isn’t looking too bright at the moment, and it is projects like this where the love of the genre is born. Yes, there were some issues with timings and tunings, but producing a pitch-perfect operatic masterpiece did not seem to be the point of this production. The excitement and the joy of all those involved in it was truly staggering, and hugely inspiring.