Review of: Doubt: A Parable at the Southwark Playhouse

More Details
A Catholic bishop scrutinised for his relationship with a young man. A combative principal Catholic sister fighting for the truth. All in the melting pot of a 1960s Bronx commune, a year after Kennedy’s assassination. Everything is in flux. Morality is being questioned.
Sister Aloysius is suspicious of the modernistic sensibilities of Father Flynn, a new bishop with an eye for secular innovation (he wants the children in the school to sing “Frosty the Snowman”!). These worries, doubts, are exacerbated by Aloysius’ suspicions of Flynn’s relationship with a 12 year-old boy, as explored through discursive scenes with the young Sister James.
It doesn’t need saying by this humble blogger that John Patrick Shanley knows how to write a script – there’s a Pulitzer Prize jury who did that perfectly well 12 years ago. Shanley’s core strength lies in his ability to deftly articulate the flaws of his characters – we chart and plot the transformation of the young Sister James’s naivety, while Jo Martin’s Mrs Muller, who has a horrifying pragmatism regarding her son’s purported sexual orientation and subsequent ostracism, as well as his relationship with the priest. Everyone, except Sister James, is beyond redemption in that regard, heavily set in their ways and incapable of movement. 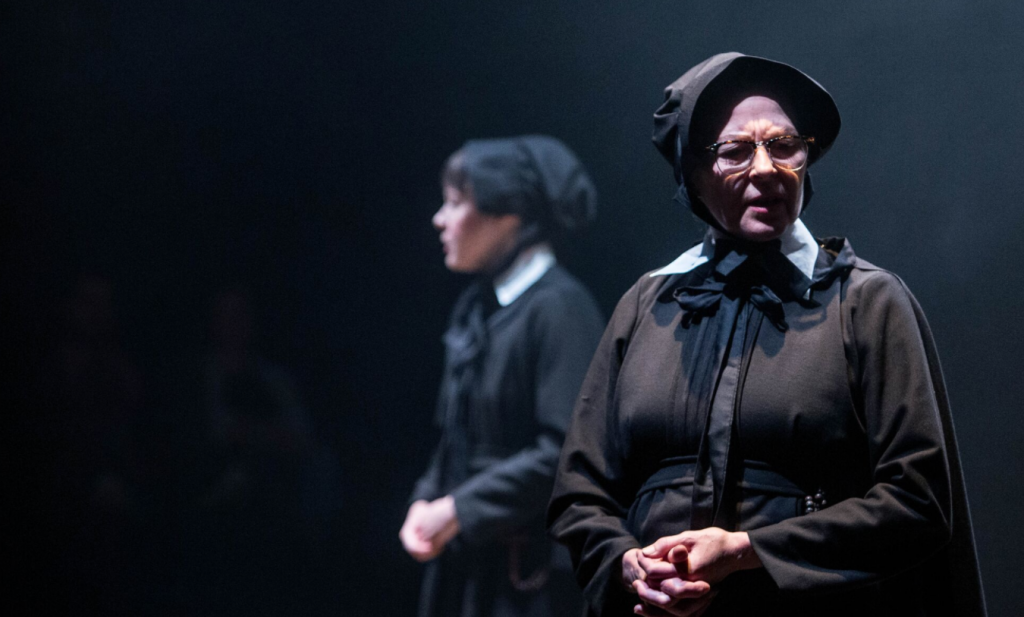 Ché Walker directs with increasing pace – while the start of the play feels lumbering, later the scenes are taut, little time is left to allow the tension to dissipate (save a few audience members feeling desperately obliged to clap at the end of every key scene, a strange experience that hammered home the theatricality of the piece, when indeed the production aims much more to be an understated representation of a complex set of issues). But this is a 2017 culture; a lot (namely Spotlight winning Best Picture at the Oscars) has changed. We don’t keenly feel the same sense of ‘doubt’ anymore, and Walker overplays his hand with his depiction of Flynn – when the man breaks the bluster is too forced, almost innately put on; it’s almost certain Flynn was a guilty party. This may have been the result of Jonathan Chamber’s depiction in the role, all sweat and bravado, but it meant that the final conclusion of the play (neatly summarised in the programme, so for the uninitiated perhaps give that a miss as a pre-show read).

One wonders whether or not ‘doing a Sister Aloysius’ will be a new rite of passage for female performers, with Stella Gonet tackling the role that Meryl Street turned into an international phenomenon when Doubt was adapted into an Oscar nominated film back in 2007. Gonet certainly has the Sister down to a t – her jawline rigid, jutting forwards – as cutting and as sturdy as the character. Her physicality is hawkish, hands perpetually clasped to her waist while body leans forwards. Birdlike. While her emotional arc may feel a bit forced (the final lines almost seemed too easy a conclusion, given the huge swathe of complexity that came beforehand), it’s hard to fault Gonet in her physical form – it’s just a shame the production around her (save from a masterful one-scene turn from Martin) failed to rise to the occasion with the same accomplishment.