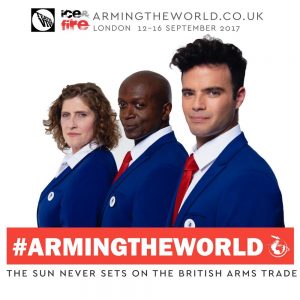 With DSEI – one of the world’s biggest arms fairs – returning to London this year to showcase some of the most lethal weapons available to purchase from British ‘defence and security’ companies and a range of other major players in the arms industry, the ‘#ArmingTheWorld: Outreach Team’ give an accessible, satirical, colourful, fun presentation on some of the products which are taking the world’s military-industrial complexes (and more than a few combatants and civilians) by storm.

From a Euro Fighter Typhoon Jet (as seen regularly in the ongoing conflict in Yemen), to a can of CS Spray (tear gas), the outreach team will be hitting five different destinations in central London to introduce the very best in British-made weapons via the world’s first Weapons Catwalk Show demonstrating to taxpaying audiences that with their help, ‘The sun never sets on the British arms trade’.

The weapons themselves (portrayed by highly trained actors in an incredible array of costumes) will describe how they have been made, how they are used and how they are traded. It’s hugely entertaining, educational and interactive with audience members encouraged to take a selfie with a fighter jet, Facebook Live Tear Gas or ‘Boomerang’ a missile to spread the word.

Sophie Austin from Teatro Vivo said: ‘#ArmingtheWorld will be a powerful and playful take on the arms trade and how we are all involved in it. Bringing the arms trade out of the shadows and on to the streets will enable us to spread the word to as many people as possible. If you come across #ArmingtheWorld you will learn shocking and surprising facts that will challenge our quiet apathy to Britain’s involvement in wars across the world.’

Christine Bacon from Ice and Fire said: ‘At ice&fire, we care about human rights. The trade in weapons is a crucial factor in the abuse of human rights worldwide. Doing the research for this piece, we were shocked to discover the extent to which the trade creates the demand which it supplies and our minds boggled at the hugely disproportionate level of public subsidy that props up the trade. Join us on the streets of London and decide what you think of lethal weapons being sold to the highest bidder on your doorstep.’