Review of: Loot at the Park Theatre

A bawdy laughter filled revival of an Orton classic, as amoral as it can possibly be.

With 50 years (almost to the day) since his murder, the revival and study of Joe Orton’s work is strikingly timely – laced with a darkly comic farcical nature, typified by a bleak outlook on the morality and essence of the British man. Even the BFI is getting ahead of the game with their Joe Orton season. So seeing Loot come to the Park Theatre feels like a two-fold occasion – commemorating a landmark event, while also brooding over some of the darker themes at play in his work.

Make no mistake, Loot is fundamentally a comedy, and this production taps into that adeptly – every line is milked for maximum comedic impact. Michael Fentiman leads his audience through to a giddy crescendo, skipping over morally deplorable acts and into some truly shocking sequences. The hedonism is twofold – just as the characters indulge in the worst of their passions, so too does Orton’s writing force us to take pleasure and amusement in what we see. It is pure self indulgence, both onstage and off.

The plot is a farcical concoction at that. An ageing Catholic man, Mr. McLeavy, grieves over his deceased wife, while her former nurse McMahon tries to wrestle herself into the deceased’s position for the sake of financial gain. At the same time, the widower’s son, Hal, and his aimé Dennis, are attempting to make away with a large sum of cash, recently acquired from a bank robbery. Everyone covets, everyone lies, the layers overlap, only exacerbated by the presence of an inquisitorial inspector. 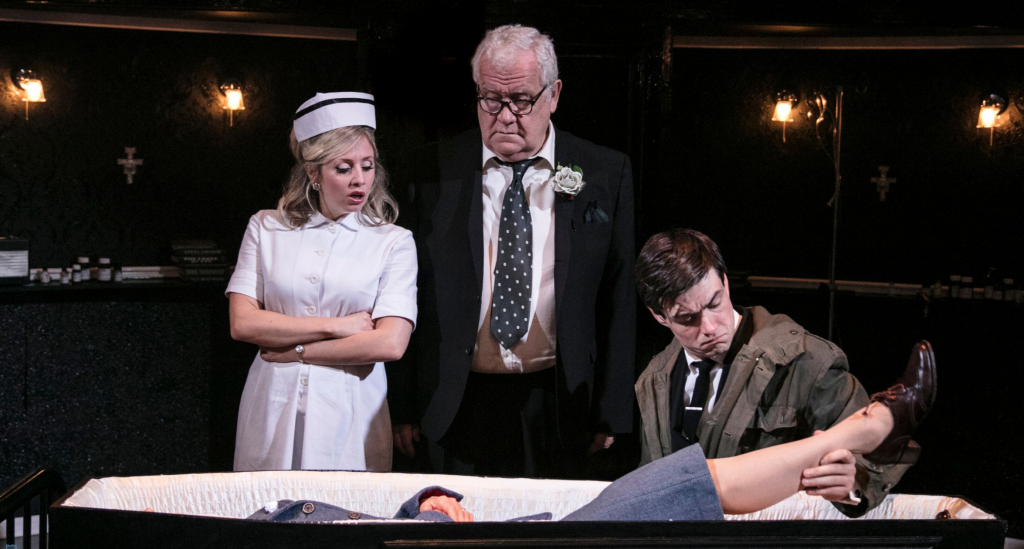 In a plot stuffed with more farce than a Richard Bean play, what was most remarkable was how thematic Fentiman made this adaptation – the Catholicism was inescapable – Gabriella Slade’s set hanging not one but three crucifixes, utterly at odds with the deplorable acts onstage. It’s hard to miss. Almost all of the 10 commandments are neatly disobeyed – ticked off with reckless abandon by the cast and Orton. The secular is steeped in falsehood, but at least it doesn’t try and keep up any pre-tenses, unlike those who mimic the Catholic faith.

On the acting side of things the cast acquit themselves with ease, relishing the gags and letting them come thick and fast. Sinéad Matthews as the nurse allows herself to command the most stage presence, forced into the epicentre of a variety of different storylines. Sam Frenchum as the son Hal seems to have taken as many tips as possible from Sam Riley’s Pinky in Brighton Rock, while Christopher Fulford’s eccentric inspector is imbued with a frenetic violence – these policemen are physical, they are as immoral as the next criminal. There is no salvation here.

Ian Redford’s McLeavy is perhaps the weaker link with less fun to have – forced into the position of grieving naif, incapable of surviving in a world of tricksters and crooks. We never see beyond his obliviousness to any form of mettle below – it frustrated somewhat. But the humour came nonetheless.

The one most disarming element of the play, which premiered back in 1965, was how rampantly misogynistic it was – for a show so vibrantly embracing of its homosexual lacings this disregard for women felt almost antithetical. And the callousness Fentiman gives his characters, particularly Hal and Dennis, never allows the irony of Orton’s writing to really shine through – Orton has, as a gay man, conflated homosexuality with moral degradation. The liars and bigots also have romantic affection for the same sex, in a time when it was disapproved of. It’s a self effacing and knowing joke – ‘I’m only as crooked as you are’, and could really have hit home – in fact it gets lost amongst the bawdy gags.

I rarely comment upon it, but it felt in this instance as though the seating in this instant really would affect one’s perspective of the show. Being sat in the circle, staring down on these characters and their despicable deeds, one felt as though the distance added a certain levity – we were removed, above, beyond these characters, who swan around below while basking in their immorality. But would those in the stalls be wracked by a sense of complicity – rather than distanced but instead on the same level, sitting and staring up at the thrust stage and the actors parading in front of them. Hard to decide, but fun to ruminate on nonetheless.