An energetic romp through the barmy bits of history. A bit of song, a bit of pong and a bit of "that's just plain wrong", that will see kids thoroughly entertained - and a little for the grown-ups to learn, too.

The Birmingham Stage Company has created a wildly energetic romp through the barmy bits of British history as well as giving West End debuts to two of its long-standing actors. 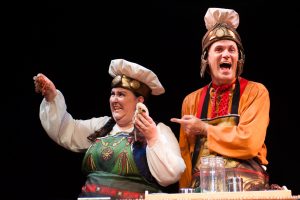 Ashley Bowden as Rex and Laura Dalgleish as Queenie manage to entertain an entire audience of school-aged children and their grown ups with only a few costume changes and some captivating nuggets of history. Their energy is infectious and has the children bobbing in their seats throughout, obviously hugely enjoyed working together. A particularly funny moment appears where Bowden encourages Dalgeish to drink glass after glass of water in a Victorian cholera scene. “You said you could drink water in the audition,” he quips almost causing Dalgeish to spit her water back out again. “Take a show in the West End, they said, it’ll be good for your career.”

The actors have great fun with the fast-moving script, which whisks us through all the key periods of history from the Romans to the second world war. The scenes are played as skits in different styles in the tradition of Whose Line is It Anyway – the Romans give us a cooking show featuring rotting fish guts and roasted dormouse; the Saxons give us a rap containing the names of villages ending in “by” (the Saxon world for village). For the Tudors there’s a Fast Show parody in a clothes shop where we learn of the colours and fabrics that were reserved solely for the noblemen – and the punishments in place for transgression. Dick Turpin gets given the TOWIE treatment, while the war room becomes the final of the Apprentice.

Of course there is plenty of toilet humour to appeal to the younger minds in the audience. A helmet of sick gets put back on a solider’s head, a poo-filled nappy gets waved enthusiastically at the spectators, while bottom wipers are mentioned in both the Roman and Elizabethan periods. The gentle audience participation involves singing a song to remember which places in England originate from which period in history, and ducking from Dick Turpin’s water pistols.

It is an enjoyable hour of theatre, with plenty of songs to punctuate the inspired script (co-written between Terry Dreary who writes the Horrible History books and Neal Foster, the director of the show and head of Birmingham Stage Company). There is also much to learn in between the slapstick. I didn’t know the Puritans banned the celebration of Christmas for 11 years, or that an outbreak of cholera that killed 616 people in the Victorian period was because of a water pump dug too close to a cesspit – worryingly still standing outside the Jon Snow pub in Soho until a year ago. So plenty for the adults to take away, too.

This show is running from the 4th August to the 2nd September 2017. Tickets can be purchased at www.nimaxtheatres.com