Another day, another Fringe Diary, this time courtesy of Powder Keg’s Josh Coates. A neat run through of the hectic day-to-day activities of theatremakers at the Fringe – this time at slightly later time than most. 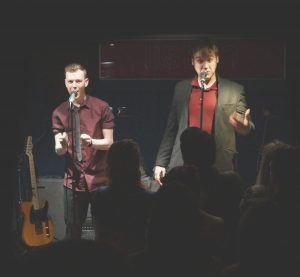 The Fringe Festival is a wonderful, exhausting, gruelling, joyous, rewarding, beautiful time of year to be in sunny(or as is usually the case, rainy) Scotland. Now we’ve been to the Fringe before, but as our own company this is our first time and for a while on the edge of burning out, though also wishing for an extra 16 hours every day just in case we miss out on any little thing this city has bursting from its seams – all we can do is try our best.

With our show not being on until 22:15 each night, we find ourselves slightly out of sync with normal human beings and a day will usually run as follows:

I love performing this show, it’s a lot of fun and doesn’t take itself too seriously which is always a laugh. In it’s relaxed way it also makes it more comfortable for an audience to approach with their own views and opinions. It’s a piece that provokes thought and invites an audience to start a conversation – which I’m glad so far they have been doing and it’s been incredibly rewarding.

We end the show the same way we always have “We’re going for a pint, feel free to come with us” and then it’s off to the Summerhall pub for a few drinks with the wonderful people we have either known for years, or met this year. People we know as other artists, production teams, marketing, producers, techies, or even just some of the staff of the venue. It’s nice finishing our show gone 11pm, because Edinburgh Fringe seems to operate on a level where they too want us to get 40 hours out of our day. Always end up getting home a little later than we plan (what? We only START drinking at like midnight…) and that’s probably part of the reason – along with throwing ourselves into our show every night with everything we’ve got – but I honestly wouldn’t have it any other way.

Powder Keg’s Morale is High plays at Summerhall NorthernStage at 22:15 throughout the Fringe