Review of: How To Win Against History

The return of the rave 2016 fringe hit How To Win Against History was always going to be a glistening event, having made a brief detour to venues such as the Young Vic in the body of last year before turning up at the mighty Piccolo tent. However, despite the swathes of star-studded writeups last year, I found it to be a slightly underwhelming piece. This might be because of the mighty ‘hype’ attached, or what I seem to encounter with most hugely successful shows – once the success has settled they fall into a clockwork mode that robs it of its previous excitement. The piece was pretty funny, very slick and with perfect timing, but I didn’t really catch a glimpse of its soul. 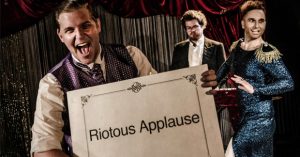 The general outline of the show is one that has been dwelt on in countless other reviews, that of the rather unlucky Henry Paget, Marquis of Anglesea. However, it feels like the production is aware of how many people step into the tent with pre-existing knowledge of the show and have therefore become slightly lazy about clarity – there is a fine line between speaking quickly for comedic effect and garbling words, leaving the audience ‘hoeflich aber verwirrt’ (in-joke) as to the structure of the first ten minutes. This is an issue that re-surfaces throughout the piece; the style of music the troupe seeks to emulate allows for long sections without any particular melody, but it also means it robs the voice of the natural ebbs and flows that aid comprehension. As such, there are many witty asides I’m sure I missed because they were raced through with the storming confidence that comes with a year’s worth of reviewer’s stars.

Obviously I am focussing on the problems I had with the show purely because the positives have been raved about so many times before. The three actor/musicians are splendid, the lyrics are witty and the subject matter hilarious – a section discussing the problems of a touring show had the spectator sitting next to me crying with laughter. I can see how, in last year’s Assembly Box, the intimacy would have guaranteed a proper connection with the troupe that was lacking in the huge Piccolo tent. I suppose that’s the nature of success; making jokes about being a small-budget show after the glorious journey of the last 12 months feel rather transparent. One to watch, certainly, but I do wish I’d have been able to catch it last year, fresh-faced and glowing.