Review of: Things We Find In The Dark

Things We Find In The Dark is the first Edinburgh offering of Lincoln-based theatre company Echo Echo Echo after their formation in February. It is a charming tale about a boy who loses his nightlight to a monster, following him into a bizarre world full of forests, caves and swamps – however, one where the relative inexperience of the company is apparent. 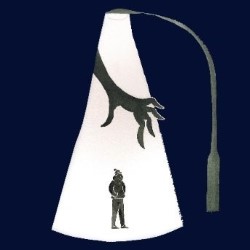 The staging of the piece is based around shadow puppetry (curiously popular this Edinburgh, potentially because of the huge Ada/Ava success last year). Sam (Samuel Hall) is joined by a chorus of very enthusiastic commentators, dressed in striped shirts and dungarees, who narrate his journey around the subterranean world. Their exuberance, while very impressive for 10:30am on a Sunday morning, does start to grate after a while – there’s constant crying, sniffling and screaming which makes one wish the ensemble let the words and the subtleties of the acting speaking for themselves. Some of the most beautiful moments are where quiet is left to reign – Sam’s discovery of his light, throwing and switching the blue glow around his hands, is utterly sublime and rather superb.

Other areas which need work include singing sections, included as a way to conjure atmosphere out of the black box space. While all three narrators own impressive voices, the tuning remained an issue throughout the piece, undermining the effect they were trying to create rather than contributing to the narrative of the story.

Echo Echo Echo have a very strong aesthetic and flashes of brilliance; it will be highly interesting to see what work they produce once they’ve found a voice and a style that works for them. This is not yet apparent in Things You Find In The Dark, however the quiet simplicity of the piece still carries a certain charm.