Review of: All Quiet on the Western Front

A classic if conventional piece of World War One Drama

In the centenary year of the Battle of the Somme, it’s perfectly right that a World War One drama should have its place on the 2017 Fringe line-up. Erich Maria Remarque’s All Quiet on the Western Front is a classic choice for revival, even if that does make it a more conventional one too. 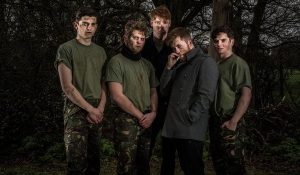 The unexceptional nature of the play’s storyline – if you’ve seen War Horse or Journey’s End you may as well have seen this one too – is only made worse by the need to cram a lengthy German novel into one hour-long production. Much of what’s particular to Remarque’s work is lost to a barer and more hackneyed narrative arc.

The show then has a tendency to feel hurried, leaving plot development shallow. Characters are distinguishable only when heavily caricatured and, while performances like Joe Taylor as Corporal Himmelstoss hit just the right comic note, our connection to the play’s heroes remains too slim to afford their tragic end full force.

Substituted in place of a substantial plot is the physical sequencing that is Incognito Theatre’s trademark. True to form, all movement has been honed under sensitive direction and rehearsed to a streamlined perfection. Unfortunately, that isn’t enough to stop choreography feeling cliché: synchronised salutes and bodies rippling under gunfire are bread and butter to the World War One Drama and they don’t get any radical update here.

Remarque’s story of lost youth in a lost era can’t fail to move and Incognito do have the skill and energy to sustain it. Their five-strong male cast nails wartime camaraderie and there’s a trust between the actors that makes relationships between them believable. Those things together make All Quiet on the Western Front a very watchable production – even if you get the sense you might have watched it all before.