Review of: The Odyssey

The Odyssey first appeared at the Fringe way way back in the mists of 2009, rightly showered with praise and leaving with a clutch of awards. Having journeyed around the world (rather like the hero himself does, although we can only hope Theatre Ad Infinitum had a smoother journey), its re-appearance in Edinburgh heralds the company’s celebratory 10th year of being. It is a stark reminder that, despite digital innovations and the constant drive to produce the next big technical ‘gimmick’, glorious stories can still be told by one performer standing on a simply lit stage. 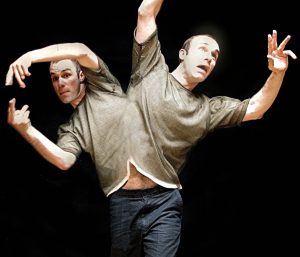 As a one-man storytelling mission it is certainly not a project to be shirked at, however, after eight years at the helm George Mann has tightly nailed every single aspect. The physicality with which he weaves the story is spine-tingling – the ebb and flow of the plot, the twists of the character arcs, the reoccurring thematic motives demand complete and utter trust in the performer. Mann’s use of breath in particular was phenomenal – to be able to create tension and twists of focus without a word is a rare gift, and one Mann has mastered. His physicality and breathing completely in sync, this piece combines visuals and aurals into a living, breathing embodiment of a ‘story’

However, there was one aspect of the production which betrays its age. The original Odyssey might be an ancient text (and therefore deals very much with mystical stereotypes), however I remained slightly less than impressed about the choice of physicalization when comparing the female to the male characters. Yes, in Ancient Greek there were large amounts of fictional females that spent their time sitting, weeping or sleeping around, but I believe choices could have been made regarding Mann’s portrayal of creatures such as Circe and Calypso that wouldn’t have made me squirm slightly uncomfortably in my seat. Sexual ladies are fantastic, but there are multiple different ways of embodying this sexuality which Theatre Ad Infinitum didn’t explore.

Despite these concerns, The Odyssey remains a true testament to the raw, unbridled power of simple storytelling. Theatre Ad Infinitum might have expanded into more technically demanding work, but it is no surprised that this early piece is still making its way around the circuit, with no sign of slowing down any time soon.