Conceptually fascinating but drawn out and dull

Last Resort takes as its setting a holiday resort for US military personnel located within the boundaries of the Guantanamo Bay base. Reimagining a real life backdrop that’s disturbing enough in itself, 2Magpies Theatre blend the realities of state-sanctioned torture with holiday makers’ luxuries, and the result is a piece that’s as dark as it is comic. 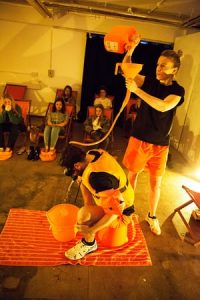 It’s certainly a clever concept. Leisure activities morph horrifyingly into fear tactics: a session of pilates leaves muscles aching and damp face towels suddenly become a simulation of waterboarding. The audience participatory aspect works well to immerse us in the sinister world of the resort. We profit from a Cuba Libra at the entrance, a comfy deckchair to recline in, and our own personal beach (/bag of sand) ­– all of which leaves one feeling somewhat complicit in the action.

But witty conceits are dragged out until their initial tension wears thin. Pacing is an issue: a shorter and more intense experience might make for a greater impression. Dialogue is weak and jokes tend to feel stagy or rehearsed. Though both actors (Tom Barnes and Eve Parmiter) strike a nice balance between enthusiasm and its chilling edge, there’s little chemistry between them. Neither has the comic timing to nail blackly humorous gags.

Last Resort is fascinating from a factual perspective. There are shocking statistics and a message that continues to be urgent. 2Magpies have the raw material of an excellent production but, ultimately, the execution of their ideas is disappointing.