Milk Present’s Joan, a drag-king piece telling the story of Joan of Arc, had the unenviable task of a second Fringe run following a surprise success last year. For some shows, this can be their downfall – take a look at my colleague’s interview for How to win against history, for example – but Joan, a one-woman piece starring Lucy Jane Parkinson, has such a genuine centre that one cannot imagine it ever losing itself to success. 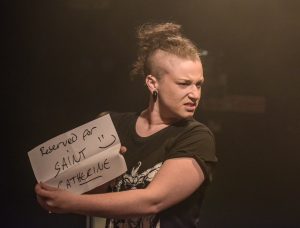 In one of the sometimes dank rooms in the heart of Underbelly, the creative team have transformed a theatre space into a small bar-like square, a simple creation with high stools and plain tables. The set itself is basic: four wooden crates, arranged into a number of positions over the course of the play (but beginning, of course, in a cross), and four mirrors marking the four corners of the square, reminiscent of some kind of seance. This simplicity is key to the production’s success, which stems from how personable Parkinson’s Joan is. When we enter the room, she greets us like friends, and her regular off-script patter (while it takes a while to warm up) makes the story of a young woman drawn to the battlefield by a saint feel incredibly close to us.

The drag itself is brilliant, both in the way it is structured and executed. The mirrors previously mentioned each hold a king outfit behind them, of Joan’s father, the Dauphin, and her executor Pierre Cachon respectively, and we see Parkinson drag up for each of them in turn. Each outfit is kept simple, and it is a testament both to Parkinson’s performance and to the direction/writing of Lucy Skilbeck that the characters are so defined. Drag is integral to this piece without being overdone or cliched, and it is refreshing to see such exuberant treatment.

However, don’t let this take away from the central story itself. Jeanne D’Arc’s tale, while vaguely known by a lot of people, is still both unfamiliar enough to be heartbreaking, and universal enough to feel familiar. Skilbeck and Parkinson have created a character who is immediately likeable and sympathetic, and a show that does what the best Fringe pieces can aim for – makes you grateful to be alive.