The revolution is sweet in this excellent female cabaret, but some elements fail to stick together

The cabaret-variety show Hot Brown Honey, which debuted at the Fringe last year, has been winning audiences over completely ever since – and the night that I was there, it took only seconds of the pre-set build up to do the same to us. This show is a riotous revolution, a group of women of colour having unabashed fun and not accepting refusals from us to do the same. HBH is fun, no doubt, but it goes beyond that, displaying high energy and dedicating it to a cause. 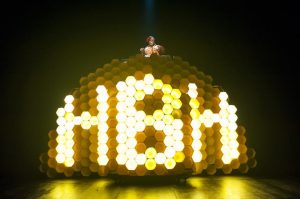 The individual acts from the Honeys are all stunning, if sometimes a little hard to understand. There was hula-hooping, rapid changing, and (in one particularly memorable moment) an entire act based around a performer making herself an outfit from leaves. Some acts were more comic (coconut breasts), and others more serious (a sung tirade against touching coloured women’s hair). The Honeys always had us where they wanted us, whether that was stood up, silent in anticipation, or howling with laughter.

While the performances, once we were in the swing of them, excelled, the show as a whole never reached complete cohesion. The opening and closing numbers, both big and brash with an obscene amount of feathers, enveloped HBH well, but these aside, none of the rest of the show quite followed on from itself. Transitions were off, in some cases clumsy, and there were a significant number of acts that barely related at all to their introductory patter.

The revolution itself was quite hard to find in some acts – the hula hooping was performed by a parody of a beach-going blonde girl, seeming to highlight stereotypes rather than bring them down, and one beautiful act of aerial acrobatics was framed by stripping to a traumatic soundtrack of tears. I think there was also something a little tricky about using cabaret as a revolutionary form. The inconsistencies in tone are perhaps unsurprising given the variety in the genre’s title. When we leave the room at Assembly Roxy, having promised to ‘make noise’, it is a little too vague what exactly we are supposed to say. There is only so much nuance available from shouted microphone messages, and while HBH is one of the most enjoyable hours one can spend at the Fringe, it does not necessarily succeed in making one think.