Review of: From The Ground Up

Perhaps it is not a huge surprise that audience participation by vote has come into vogue. This structure has, of course, been popular on television shows for an incredibly long time, and even on some that link directly to the theatre – think, for example, of Andrew Lloyd Webber’s various musical audition shows, in which the BBC viewers became the casting directors. The Almeida Young Company’s From The Ground Up is not alone is one of many Fringe shows that incorporates the audience’s opinion into its entertainment, and the Fringe also coincides with the run of The Majority at the National. The British (however you choose to define that) are, at this moment, a group voting on important issues almost annually, and so it is only natural that this aspect of life has been imitated by art. 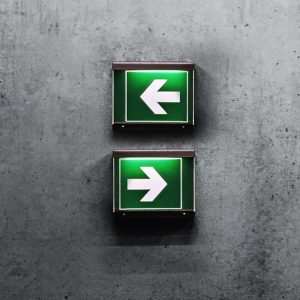 In the bunker space at the bottom of Assembly Roxy, the audiences for FTGU are stamped on each hand before we go in – the right with ‘YES’, the left ‘NO’ (in, might I add, some very shower-gel proof ink). Rather than any complex technology, it becomes clear that these are the means we will vote with over the course of the show. The company, playing characters named after colours to ensure neutrality, read out statements and we vote; first with our hands, then people stand and take steps across dots on the ground in turn. The answers that we give and the choices we make over the course of the show result in our being sorted into different groups, which, at the end of the performance, we can leave if we start to disagree.

The show shies away from being about anything more than voting and choosing itself, the climax focussing on the people who cannot be sorted. It ends with a final monologue (that, due to the unfortunate placement of a concrete column in the middle of the space, I missed) performed to a final audience member who cannot be sorted into any of the groups. She is instead pronounced ‘grey’. The conclusion is elegantly simple, making the voting itself the story rather than trying to squeeze more in to the mere hour the company have. This simplicity and control is rare to see in a Fringe show, and it is suggestive of the thoughtfulness in this production as a whole. It’s hard to pick out individual elements as one would usually when reviewing, which perhaps proves how much the production succeeds – I wasn’t thinking about the acting, or the direction, or the design, so much as I was thinking about the choices I was making, and who these choices made me. Which, after all, was the point.

FTGU is a decent show that succeeds in making its audience laugh and think. While its simplicity gives it success, it does also make it hard to define. The show is worth seeing not because of what it shows you about the creatives and production, but what it encourages you to think about in your own self.