Review of: Creatives at Pleasance Courtyard

An anticlimactic final performance at the Fringe.

More Details
Irvine Welsh has not been having a great Fringe. Over at Assembly his Performers is being something close to reviled, with reviews calling it antiquated – at best lewd, at worse offensive. It’s strange to see a writer being critically dismembered by those merely visiting his city; a place he has used to create a lasting literary heritage. He may not been the only one to have put modern Scottish literature on the map, but he definitely had a say in where to place the pin.
It’s even more disconcerting therefore to see little of his powerful writing, alongside Don de Grazia, transfer to the stage. In pop-opera Creatives, running at the Pleasance Courtyard, we alight on six music-writing course graduates at a Chicago art school. They’re cajoled into a competition to write the best song, moderated by a successful (read: sell-out) former pupil, now churning out internationally successful tracks with vapid little integrity. Fame is a poisoned chalice. 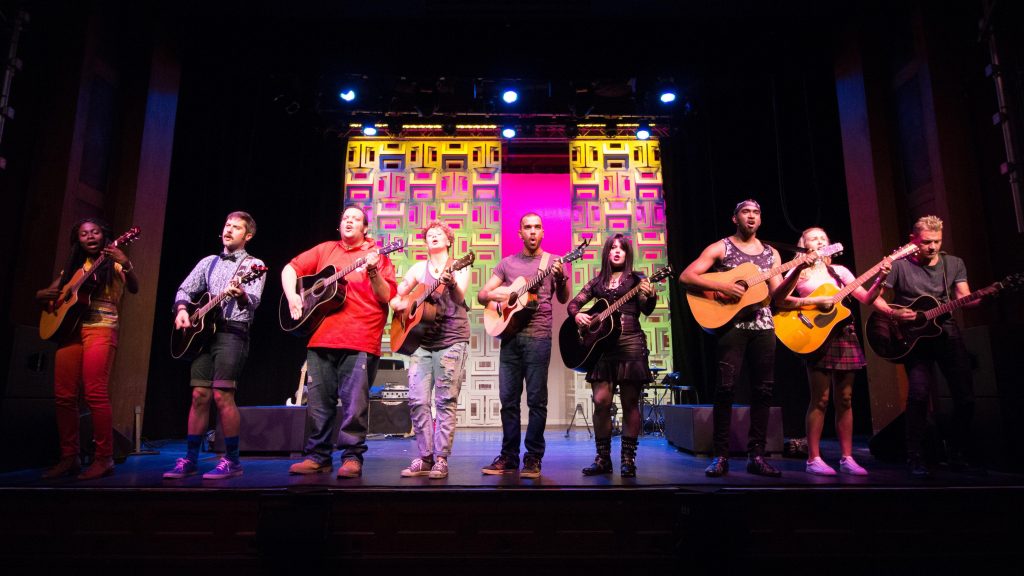 The plot almost begins like some contrived episode of Glee, each of the poorly developed pupils revealing stereotyped and predictable personality quirks. The Trump sympathizer even writes a song about making America Great Again. The figures are almost all entirely unlikable – never a bad thing for a play, but meant we as an audience felt little investment in the competition presented.
Then the show throws in a large curveball, blowing up the scenario presented and granting us a much more charged one. The pacing picks up, even if the direction falters (one character starts picking at her shoe laces rather than tend to a gunshot graze on the side of her head). Here it springs to life somewhat, and the quieter, less energetic opening seems somewhat justified. Though if you lose your audience early on it’s far harder for them to get back on board.
Music from Paul Brenner functioned to a point, incorporating the multitude of different styles and genres at play – though the songs, by being seen as merely part of the competition, feel more like a functional exercise than intrinsic to the story. Even their ‘Once’-tribute style ending felt a tinge forced.
Due to an unfortunate cancellation of Monica Dolan’s The B*easts owing to a potential ceiling crumbling, Creatives managed to end up being my final show at the Fringe. An anticlimactic end to the month.