Acéléré is a crowning glory of the Circus Hub, invariably fun and an exciting ride for spectators. Amidst the Edinburgh rain being transported to the Colombian sun

Circus is drawing bigger and bigger crowds at the Fringe, and the Lafayette tent on the Meadows has certainly become the epicentre – the cavernous space offering audiences scale and sets not feasible at other venues in the city. The room bristles with excitement.

And if Acéléré is one thing, it’s exciting. Music, dance, acrobatics and a kaleidoscope of circus skills coalesce and come together in a patchwork evening of Colombian celebration. There’s a cheeky sense that no one on stage is taking much very seriously too – a liberating sentiment that lets the party atmosphere take hold. There’s a spectacle here – each segment billed and sandwiched between choreographed ensemble dance pieces, allowing shifts in tone to dispel the monotony. This is, of course, a double edged sword – sometimes the show comes across as more of an uneven patchwork, with some sequences, including the teeterboard passage complimented with a trampette, seeming to be more repetitive than climactic.

That’s not to say there were some staggering moments – the aerial work was refined, while the cyr wheel/German wheel hybrid, mounted on a performer’s forehead no less, was tense and beautifully executed. But the showstopper came about a third of the way through with the use of straps – two performers suspended from one another, at one point using only their mouths to defy gravity and hang from the ceiling. It was excruciating and tantalising in equal measure. 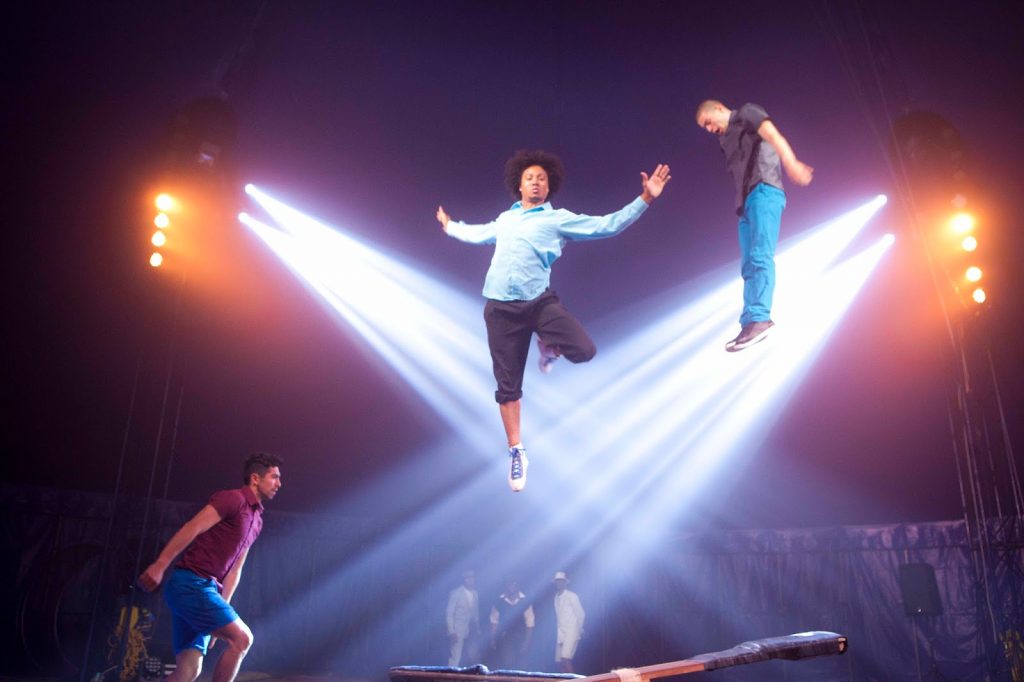 Where Circolombia’s show stands on its feet is with its construction of each performer’s personality – they are not simply a faceless ensemble, but each had a personality and history in their own rights. One aerialist spends her entire set simply talking about her life and experience. There’s humanity under all the superhuman strength. When the ensemble are assembled for bows they’re individually presented, shown off and jovially pushed across the stage – these guys appear to be having as much fun as we are.

The show is bookended by two basket toss sequences – defiant shows of ensemble vigour. It’s a speedy run that almost cries out for one or two more acts, but the fun of the performance is infectious – flooding the Circus tent with nonstop fun and excitement. Acéléré is a crowning glory of the Circus Hub, invariably fun. Amidst the Edinburgh rain being transported to the Colombian sun can be a wild ride.