Review of: Boris and Sergey's One Man Extravaganza

A late night packed house relished the mad antics of Boris and Sergey. Two men and four women (plus the obvious couple of hand held marionettes) managed to keep a rather whacky sense of fun going for the majority of the performance. Opening with a soundtrack recalling  50s’vaudeville, the team created a level of anticipation for the arrival of the lead puppet – as the music builds Boris, decked in a fancy top hat, arrives on a slip wire and zooms over the audience to land with a flourish in the hands of the puppeteer. One only wishes human performers had this type of dexterity! 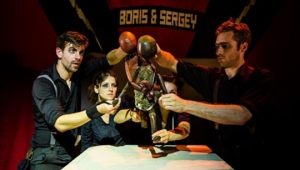 From the very start the company broke down the barrier between them and the audience by crowning a couple in the front row (with cloak, crowns and garlands) a King and Queen – creating what they termed ‘a royal performance’. From then on the antics came thick and fast. Game show banter and reactions to a very atmospheric sound track were no doubt all scripted (?) but I am sure along with elements of improvisation, which was much more off the hoof!

However, it was the randomly inspired exchanges which seemed to surprise the puppeteers themselves that delighted the audience the most. Example include ‘playing the Singapore chicken card’ (which floored everyone) and pubic hairs being caught in car doors – making the shoulders of the handlers shake with mirth as much as the actual audience itself.

The ability of the team to babble on is endless, but sometimes the constant chatter wears slightly thin when they hit a point where the material is rather patchy. There are flashes of inspiration , but also moments of insecurity when their stooges from the audience, King, Queen and surprise guest seemed to throw them or at least miff them – certainly the team’s responses might have had less attitude. Essentially, although there was a shape in terms of set sequences as well as some narrative to follow, the vignettes were either too long or the weak material was over played. There is lots of good energy here and the team clearly work in quite a slick fashion, but it all wears a bit thin because of the lack of sharp material thatactually has some real comedic content. The actually puppet manipulation was impressive given the cohesion of the six puppeteer, but even that palled towards the end.

For late night entertainment that has comic banter and chat then this might just do the trick, if you have had a few beers! Flabbergasted, sadly, we were not – a shame.