Black Mountain remains unconvincing. We are promised thrills and end with a domestic drama - a molehill.

Billing a play as a thriller is always a bold move. The show has one fundamental task to live up to – being thrilling. If it cannot fulfil that one goal, no matter how successful it is at all others, then it has fallen short.

Black Mountain begins with two figures, Paul and Rebecca. They wake up in the same, isolated woodland house one morning – both having just arrived. From somewhere undisclosed. They are visitors, but apparently not together – conversation is distant, almost unfamiliar. They remark upon their respective room lightings. Maybe family friends. The first of many questions that rapidly evolve as the show develops, constructing this sense of intrigue and elusiveness.

A low ebb of music keeps the tension knotted throughout as the questions evolve – what has Paul done? What does Rebecca want to do? Who is Helen, and why is she at the house, giving clandestine visits?

Brad Birch, responsible for The Brink and Alienated (2013 Fringe First Winner) certainly gives us a tasty premise. There’s a tension to the writing – a sense of withholding. Snatches of familiarity (Rebecca, almost unprompted, remembers something from an uncharacterised past) are uttered between awkward pauses. Looking through his script the most common word is beat, the number of forward slashes almost impossible to navigate at first. This is staccato theatre, the gaps in dialogue, to use the well worn pun, speaking volumes. The lights stutter and blink, as unable to function as the relationships in the play.  The tension is slowly winding up. 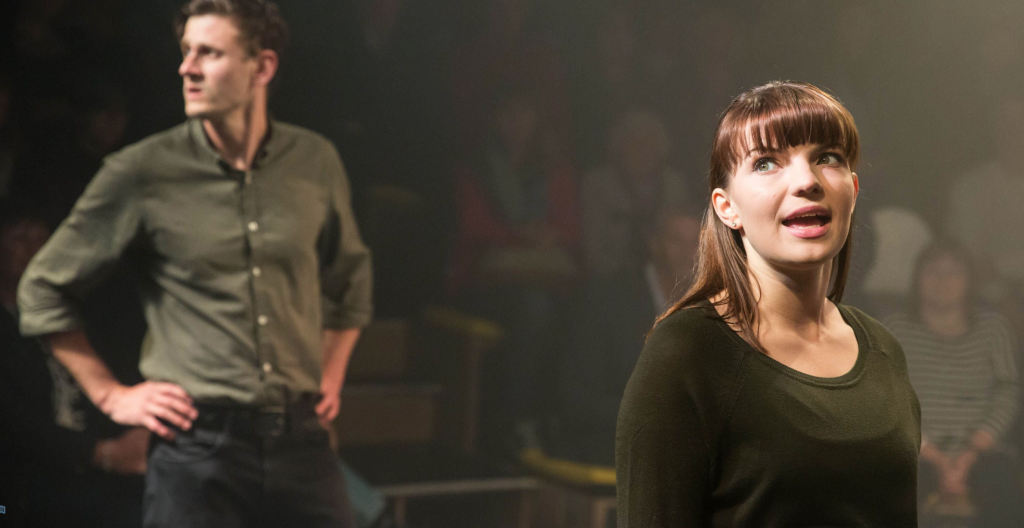 As the show unravels and explodes there is, however, Birch seems to resort to the cheap ending – a complete sense of anti-climax.  the three-hander ends up as messy as we’d expect, packed with domestic betrayal and infidelity. About as thrilling as an EastEnders special. It all feels that bit too obvious. The thriller almost becomes a soap.

This is is not helped by the lighting design from Peter Small. While the Roundabout always offers versatility and smokey claustrophobia, rather blips and flashes of light completely intrude and disrupt the script, ruining the flow and jerking us out of the intensity of the performance. Rather than investing in the personalities of these figures, we are tirelessly reminded of the fact we are in a theatre. The loud plumes and bongs of the lighting only make this worse, constructing partitions over what should be a gradual slide.

It’s a shame, as the acting holds up considerably well. Katie Elin-Salt’s Rebecca in particular, with distinct intonation, each line curled around her Welsh accent, worked neatly to convey the sense of awkwardness and distance at play – as she gives way to more reckless behaviour we are caught up in her enthusiasm. Hasan Dixon’s Paul, saddles with the responsibility of experience the theatrical ‘breakdown’ as the play progresses, provides a neat narrative thread.

Yet Black Mountain remains unconvincing. We are promised thrills and end with a domestic drama – a molehill, it seems, rather than the lofty titular climes.