Review of: How to Act

How To Act, the National Theatre of Scotland’s production at Summerhall this year, spends its first ten minutes or so in the guise of a slightly parodical and entertaining acting master class. It’s interesting enough, I found myself thinking, this guy is saying some mildly racist things and the mixed race girl is looking offended, and we’re laughing – not bad. This is not, however, how the play continues, and while we do spend some of the hour further in a masterclass setting, this is nowhere near the point of the piece. 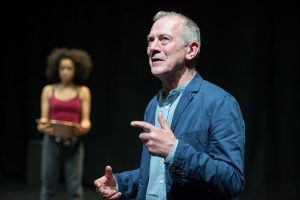 Over the course of the hour, fictional director Anthony Nicholl attempts to give acting advice (he does not like the term ‘masterclass’) to young actress Promise. This scene is interrupted regularly by flashbacks, both to Promise’s mother’s earlier life, and to Nicholl’s trip to Nigeria years ago. Gradually, and horrifically, we realise as an audience that these two earlier stories are one and the same. The moment that Nicholl claimed as being the most truthful of his life – watching Nigerian women perform traditional dance – was a performance, a way for them to make money. The Fringe seems the perfect stage for this, an investigation into what we take from life and put into our art, and how right we are to do so.

If this play were not supremely well produced, it would fail completely, but thankfully Graham Eatough’s direction is as strong as his writing. We feel entirely in his control, with impeccable stagecraft guiding both actors and audience through the difficult switches between present and past. Both Jade Oguga and Robert Goodale give excellent performances, particularly noticeable in the way their characters bleed into both the pre-set and the ending.

How To Act does not tell us about truth, theatre, or performance, in the way its title claims it might. Instead, it takes an alternate definition of the word ‘act’ – it tells us how to behave, how to be careful of our decisions, and how to remember that our transgressions affect not only ourselves, but those around us.