Review of: A Super Happy Story about Feeling Super Sad at Pleasance Courtyard

The act of discussing mental health issues in the context of theatre can become rather exhilarating, but also in some ways oxymoronic. The process involves taking some of our most internalised, personal psychological issues and placing them in a performative capacity. The private becomes the public. It can mean ideas evolve and unravel, while at the same time becoming didactic or empathetic.

A Super Happy Story does these things with the cheeky exuberance that typifies the world of the Edinburgh Fringe. Writer Jon Brittain and MD/composer Matthew Floyd Jones are rarely heavy handed with their subject material, instead keen to find rapport and connection instead of weight. Depression is so often associated with distance that to make us feel intimately connected with the topic is vital. For example, as we enter into the Pleasance Above we are greeted by central performer Madeleine MacMahon organising seats and putting people at ease, shepherding us along and whipping jokes on the fly. It forms trust, acquaintance.

From there the speedy musical pushes through the neatly compartmentalised life of Sally, from her school experiences and first exposure to depression, through to a job on the street raising money for stray dogs, her diagnosis and contact with support groups. The periphery context is conventional, even relatable in places (Sally cringing at her favourite teen band, or idealised perception of Disneyland), contextualising not simply the ‘symptoms’ of depression, but also the realities, mundane realities, of it. The most keenly felt song turns out to be one of the earliest – highlighting how there is no definitive cause for the illness – all we can do is acknowledge its existence and act in response. Brittain, responsible for the Olivier Award-winning Rotterdam, knows exactly how best to make this story work. 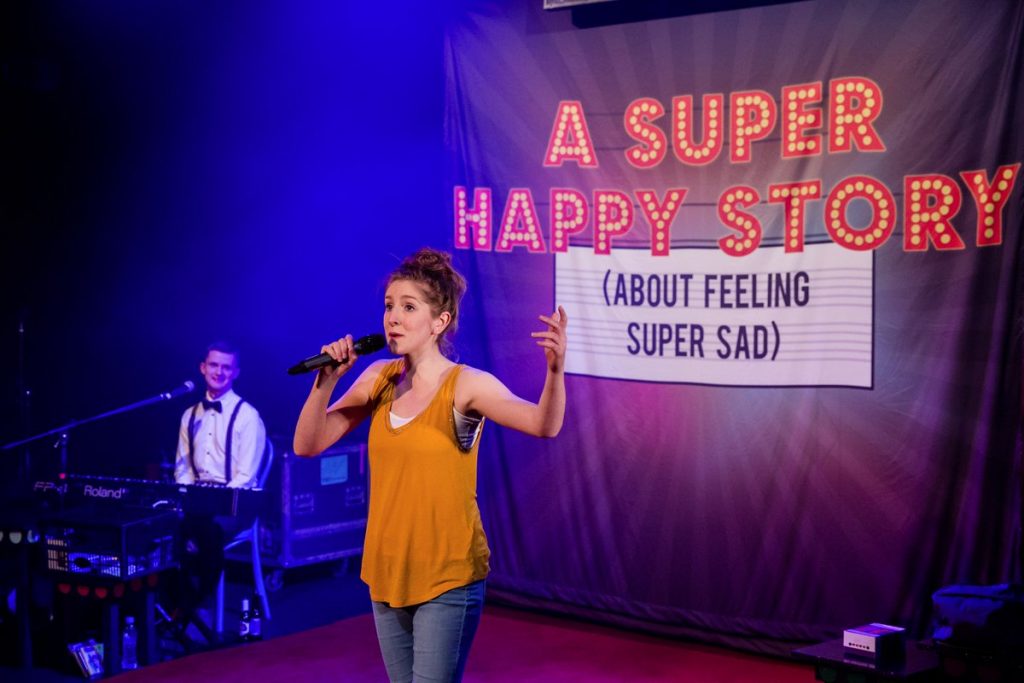 It’s fast, unflinchingly funny and never spends too much time dwelling on the highs, just as we know there will always be new lows to face. Sally’s story is a whirlwind of incident, of humour and familiar faces both capable of intense ignorance and unexpected support. It’s as messy and as scrappy as real life would be.

But where A Super Happy Story goes the extra mile is with the composition, the three stage performers as well as Floyd-Jones on keys forming the perfect quartet in dishing out the sequence of catchy tunes. Whippy optimism jerks through to slow melancholia.

The show could never function without the central performance from Madeleine MacMahon, in what is certainly, given the unending month run, a draining role. Part-confessional, almost biographic, MacMahon inhabits Sally completely, shouldering insecurity and bright exuberance with a single smile. She’s supported by Sophie Clay (playing a host of, sometimes caricatured) female roles, while Ed Yelland delivers comedy in spades whenever necessary.

This will be one of the shows of the Fringe, and rightly so. Brittain is set to be one of the defining theatrical voices for a long time to come.