An immersive experience that builds to crescendo: LIES is an unmissable hour of escapism

Total commitment to spontaneity can easily come at the cost of slickness in theatre, but £¥€$ (LIES if you’re after the unpretentious title) blends the two with finesse. Things are too streamlined to be true Fringe: actor bankers in sharp suits operate the show from behind polished mahogany tables, there’s a tight schedule and a script of sorts. Yet it’s audience members that are calling the shots on the show. 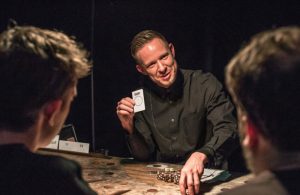 Ushering us into the darkened room that is Upper Church at Summerhall, Ontroerend Goed distribute their audience between six tables surrounded by six stools. We’re introduced to the fellow ‘banks’ who will be our semi-competitors, semi-allies for the duration of the production. Action unfolds from these intimate groups, but with a sense throughout that somebody with an earpiece somewhere is monitoring the movements of the whole room.

There’s a tension in the theatre that is palpable and infectious, mounting with each strike of a gong that sits at centre stage. Under the careful oversight of each table’s financial supervisor, audience members are invited to trade and invest the millions of pounds apportioned at the show start. We slip instinctively into the money grabbing role Ontroerend Goed have groomed us for and there’s an excitement that’s only partially undercut by discomfort.

What is being simulated each night at Summerhall is the global financial crisis. Which means that, when it comes, the show’s climax is inevitable. It’s also hampered to an extent by the conceptual complexity of the build-up: much of the finer economics went over this audience member’s head, which meant I couldn’t tap into what it should have been the production’s job to expose. Clearer exposition might be needed.

Then again, whether or not you understand the extent of what you’ve been immersed in, it’s impossible not to respond to an atmosphere that builds to crescendo. After an hour of escapism, you’ll leave LIES feeling excited and a little guilty. And if you feel you’ve been led astray somewhere along the line, that’s certainly part of the point.