Following the sell out run at the National Theatre this summer extra dates have now been added for the return of Inua Ellams’ play Barber Shop Chronicles to the Dorfman this autumn, now opening on 20 November and in repertoire until the 9 January. Tickets go on sale at midday on Thursday 31 August. 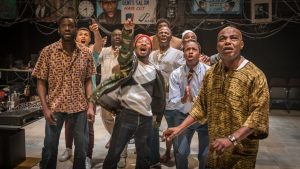 Ellams’ dynamic play features characters from across the globe as the action journeys from a barber shop in London, to Johannesburg, Harare, Kampala, Lagos and Accra. These are places where the banter can be barbed and the truth is always telling. Newsroom, political platform, local hot-spot, confession box, preacher-pulpit and football stadium. For generations, African men have gathered in barber shops to discuss the world.

Speaking about the play’s return to the National Theatre Inua Ellams said ‘I’m delighted to see Barber Shop Chronicles returning to the Dorfman Theatre this autumn. Bijan’s production perfectly captures the mixture of comedy, intimacy and drama of the different characters from around the globe, bringing to life their intertwining stories as they explore the topic of black masculinity. To have the same cast returning for the autumn is really exciting, they brought so much energy and enthusiasm to the play in the summer I can’t wait to work with the whole team again.’

Barber Shop Chronicles is a co-production with Fuel and West Yorkshire Playhouse.