Review of: Apologia at Trafalgar Studios

A shaky adaptation of a text with a few faults, though not lacking in talent on stage.

The first thing you notice when you walk into Apologia’s Trafalgar Studio 1, a relatively intimate space given some West End venues, is Soutra Gilmour’s set design. Not the meticulously crafted kitchen, almost grafted from some rural country house that sprawls across the full width of the stage, but more specifically the wooden picture frame that surrounds the set, a hyper realised fourth wall that remains constantly present. The play becomes the canvas, almost entirely reminiscent (with its large, centralised table) of Da Vinci’s The Last Supper.

The comparison is an apt one. Central protagonist, the ‘terrifying matriarch’ Kristen Miller (Stockard Channing, more on performance later) plies her professional wares as an art historian, with a particular passion for Renaissance paintings – one monologue about Giotto’s Lamentation forming a cornerstone of the early first act. But as profoundly successful as Miller’s professional life is, there’s trouble in the family – her memoir, the titular Apologia (an argument for her life decisions, but not, as she stresses, an apology) omitting all reference to her two sons, Simon and Peter (versatile actor Joseph Millson doubling up – The Last Supper comparison extends), taken away when children to live with their father during a troubled divorce.

With their two partners, Claire and Trudi, in tow, the stage is set for an awkward family evening to celebrate Miller’s birthday.  A domestic drama laced with political and social undertones – a familiar concept to those who have seen Winter Solstice at the Orange Tree or even Dessert at the Southwark in the last eight months. 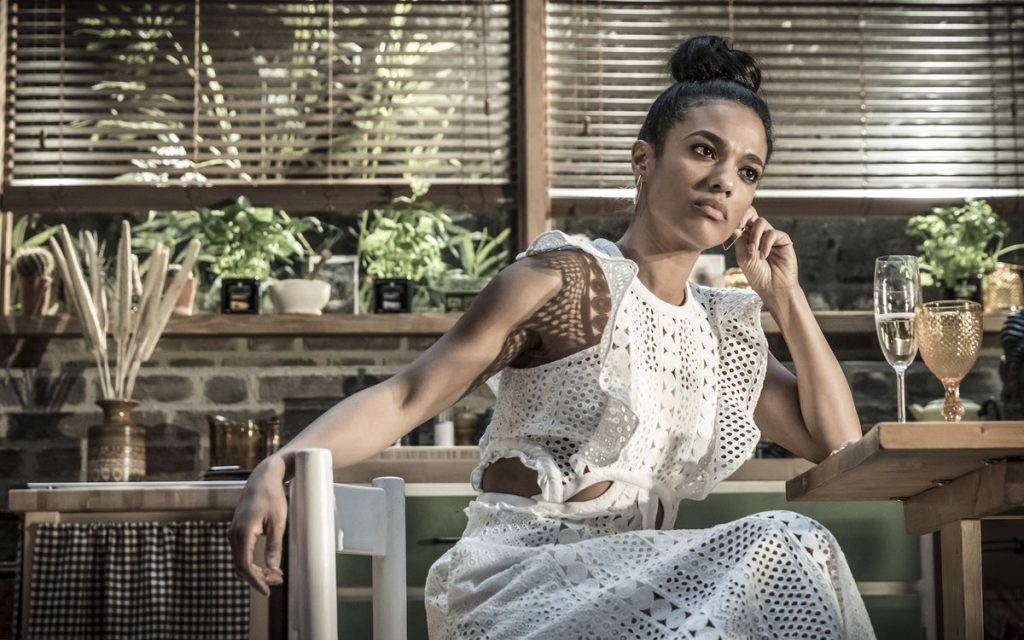 Writer Alexi Kaye Campbell has assembled an assortment of concepts here – many of which prove fruitful. Miller’s ’60s radicalism is scrutinised against a modern lens (her left wing idealism may have felt more dated before the most recent election mind), while Peter’s fiancée, the American Trudi ( played by Downton Abbey’s Laura Carmichael, more on her later too) , reflects on her own religious beliefs over the course of the play. But like many shows of a similar calibre the concept does not feel overly taut – these discussions float abstractly, drifting over the picture frame Gilmour rings around the set.

Gilmour cannot be to blame for this looseness – director Jamie Lloyd, veteran of the Trafalgar Studios, is equally at fault. When the show opened at the far more intimate Bush Theatre 8 years ago the proximity would have heightened the domestic tensions, promoting that sense of empathy rather than distancing the spectator from character. Given the success of Lloyd’s adaptation of Philip Ridley’s A Pitchfork Disney earlier this year at Shoreditch Town Hall, where audiences were thrust into the room of the drama, to now be forced outside of it and made to sit as if a punter in an art gallery really imposed a sense of stillness on the production.

It was dismaying, given the calibre of talent. Carmichael’s Trudi, the evangelical believer that has inadvertently chased Miller over the Atlantic, has a nascent brightness and excitement, her physicality responsible for an angular gait and and awkward insecurity. The character, quite easily capable of becoming an air-headed stereotype, instead develops into the symbolic heart of the show.

Stockard Channing’s Miller flourishes in the kitchen drama, magnetically so. In a production that exacerbates the distance between audience and scene, her reproachful nature and wittily crafted zingers, often delivered with a bombastic slyness, become terribly fun.

Freema Agyeman, making her stage debut no less, serves as a perfectly energetic Claire, the TV star girlfriend of Simon. Her explosion of ‘I’m not a piece of meat’ during one of the funnier set pieces, after already being subjected to Miller’s scrutiny regarding her role as an actress in a fashion based drama serial (or soap, as it’s called to most) taking on a fantastic double meaning.

To return to earlier comparisons, the tautness of Dessert last month came through its central thematic idea, presented with complete immersion at the Southwark. The angle was evident. Here there are many frenetic elements coming in and out of play, different issues presented on, given the canvas, a two-dimensional stage. The conflicts are opaque, devoid of variety.

This leaves the reviewer in a tricky predicament – how far should one judge an adaptation of an existing work, or judge that existing work for its own faults? When a text is no longer new writing how far is it eligible for scrutiny? Questions that have no doubt been around for decades, but suffice it to say that there are many questions at the heart of Apologia – it would have just been better to have them not so far distanced from the offset.