Review of: Road at the Royal Court

Price:
From £12
Reviewed by: Alex Wood

Jim Cartwright’s Road fits neatly and proudly in the genealogy of the Royal Court, nestled alongside the great heights of Osborne and Bond, a precursor to the likes of Elyot or even Butterworth. Chronologically it also lands almost exactly in the middle of the venue’s 60-year history – emblematic of the social consciousness the venue has, and hopefully always will, strive to promote.

We are transported to a fictional town in 1980s Lancashire, witnessing the lives of inhabitants on the single, titular Road. Street lights, extravagantly stretched vertically, hang overhead like silent observers, and at first the show feels like a tribute to the opening act of von Trier’s Dogville. We jump from character-to-character, moment-to-moment over a single night, each scene being conjured forth then disappearing back into the shadows, or below ground.

There’s a love and passion, bordering on reverence for the script – a juxtaposition of heady comedy and grim realism. Sorrow and nostalgia give way to romantic capers. There is also hope – while Act One ends with a manifestation of an invisibly oppressing force, characters static and immobile, Act Two ends in the exact opposite way. 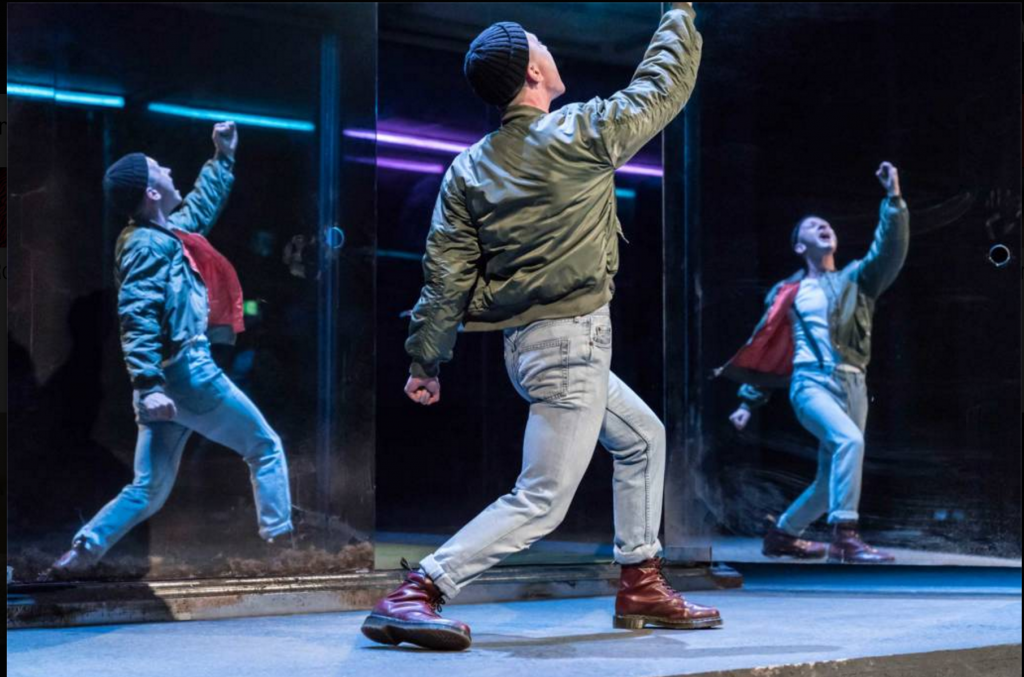 On the acting side there is strong acquittal all round – the ensemble often constructing the titular Road with a cohesive persistence, every character an intrinsic part of a wider environment while also typifying a ‘larger-than-life’ persona. Cartwright’s assortment of monologues, two-handers and group scenes allow the variety and flavour of the individuals, many of whom only appear once or twice, to shine. The time we spend with each is sometimes fleeting, other times it’s protracted.

Some scenes stood out – Michelle Fairley’s romantic tryst with an inebriate soldier being a comedic masterpiece, matched by her hoedown performances a few scenes later. Indeed, the Game of Thrones actor makes the second act her own. Lemn Sissay, with suitable backing by Tchaikovsky, delivers what is sure to be the most accomplished dance between man and shopping trolley, while Shane Zaza’s climax to Act One, while sometimes close to losing too much energy, was a harrowing performance given a tricky physical placement. Liz White felt entirely underused here as perhaps the most accomplished multiroler of the ensemble, while June Watson’s kitchen monologue was heartwrenchingly intricate, commanding Cartwright’s altering form with ease.

Tiffany’s love for Cartwright’s piece and the nature of its veracity are evident, but it’s Chloe Lamford’s design that steals much of the show, somewhat transforming the events placed on stage. A large, square, glass box, transparent when necessary (though also reflective at key moments), emerges regularly throughout the piece to dominate the stage. An oversized theatrical cabinet of curiosities. The stories in the fictitious town are enclosed within the box, sometimes they burst forth from within the box. 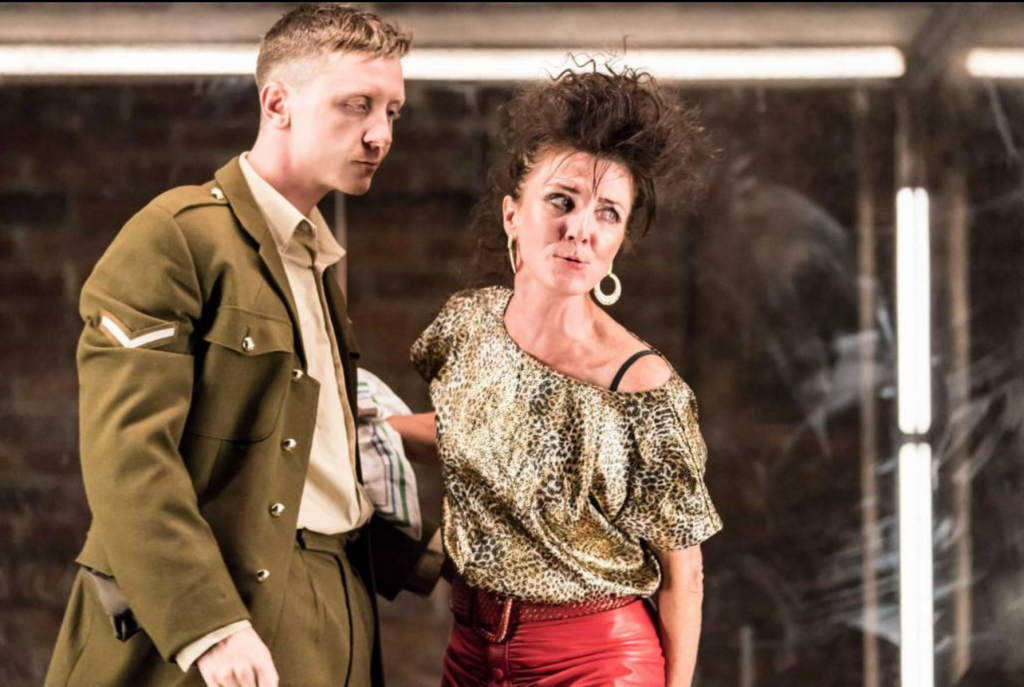 We, the West London, affluent audience witness these stories are if they are ornaments, to be casually regarded, consumed – we are fascinated by them. The theatricality is in itself an inditement; we have not lived the lives of these people, we do not know the realities. By watching the stories, laughing at the tomfoolery, we draw a line between empathy and sympathy – while we can relate to these fictional characters on stage, we do little to help individuals in these circumstances in real life. We give standing ovations to depictions of poverty within our own state. The act of performance, as well as the act of spectatorship, is politically charged.

But Lamford doesn’t stop there, letting cascading steps descend into the audience. Characters stumble drunkenly over the fourth wall and into the audience below, out from the demarcated spaces (hence Dogville) and bleeding into our modern day. A similar effect was achieved by the West End run of An Inspector Calls last year, though here it feels much more subtle and subversive.  The product is very much current.

A reviewer balks at the thought of ruining an ending of a show, but suffice it to say that Tiffany, for all his wondrous depictions of Cartwright’s piece in their Thatcher-era context, concludes the play with perhaps his most audacious creative decision, transporting this tale of 1980s poverty into a very real, very post-austerity world. It’s bold, and it’s hard to say whether or not he pulls it off as neatly as he’d’ve hoped, given the musical accompaniment and physical sequences on stage. But while pulling at heartstrings, the closing of the show also plucks at the most important theme underlying this specific revival – these stories are present, they are real, and they should be remembered not just for historical reasons, but as lessons for our thinking.