A thought-provoking new play by Lucy Kirkwood with stupendous and innovative staging. Combining issues of the future of the universe with a family in trauma makes for a compelling evening, enhanced by dialogue that crackles and the performances of the highest calibre from Olivia Williams and Olivia Colman. In some respects the play tries to take on too much, with many layers of plot, and the science parts, while initially compelling, become a little laboured.

Alice is a brilliant scientist. She is not as brilliant as her mother, who really should have won the Nobel Prize given to her father (according to her mother), but smart enough to be involved in the search for the Higgs Boson, or so called “god particle”, at CERN. It is 2008 and Alice is preoccupied with the launch of the Large Hadron Collider and so has little time to focus on her sister who has lost a child, a mother who fears dementia and a deeply troubled son struggling with the disappearance of his father and life in an international school. Her sister Jenny is generally regarded as “thick” by her family, particularly her mother whom she looks after, and spends her time worrying about information that she finds on the Internet. Jenny constantly seeks reassurance and forgiveness from her family but rarely receives it.

At its heart Mosquitoes has a lot to tell us about sisterhood. The counterpoint of searching for the essence of the universe and its potential dramatic demise against the acutely painful turmoil of a family facing loss and upheaval is very effective. Sharp and well-observed dialogue, together with beautifully observed performances from Olivia Williams as Alice and Olivia Colman, pathetically comic as Jenny, ensures that, despite some highly complicated subject matter, this play is eminently watchable. The problem, however, is that fitting in so many layers of narrative when the science part is hard to grasp leaves a degree of confusion. Add to the narrative issues surrounding science and religion, MMR jabs and IVF and you are left with a lot to digest. Helped by tremendous stage effects, explanations by Alice’s errant husband, of the potential ways in which the universe might end, are brilliant, and Katrina Lindsay’s set design once again show how adaptable the Dorfman stage is to cutting-edge theatre. The innovative set manages to encapsulate the universe, the Large Hadron Collider, flats in Luton or Geneva – as well as gauche teenage Internet conversations. Nevertheless, the scientist’s return to the stage later leaves us facing overkill – you can’t create PhD scientists in under 3 hours. 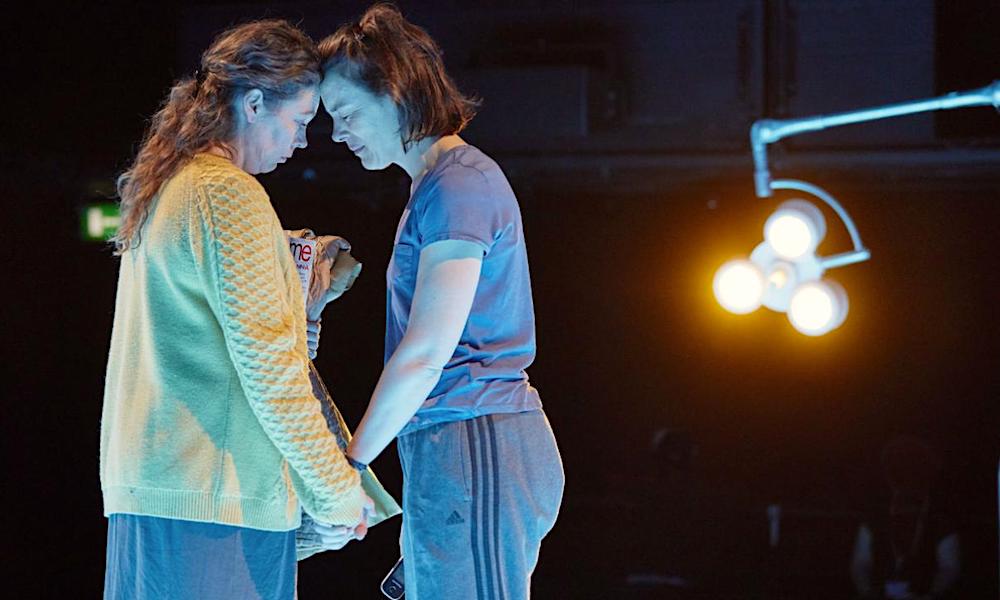 The complexities of the family issues, particularly when Alice’s son goes missing after an unfortunately sexting incident, risk overwhelming the broader themes of life, loss and the universe. Lucy Kirkwood wrote one of the best plays of 2015 with Chimerica, and is undoubtedly one of best writers we have. However here she may have taken on a little too much. Just as with Tom Stoppard’s efforts to explain the complexities of human consciousness in The Hard Problem, having superb dialogue delivered by the very best acting talent, more than ably directed by Rufus Norris, cannot overcome the difficulties of an overly intricate plot and tough to understand subject matter.