Review of: King Kong at the Vaults

A gorilla is hunted, feared and chased with hilarious results. This comic journey is more about the hunter than the hunted!

King Kong, currently running at The Vaults Theatre, in the bowels of Waterloo station may not sound too appealing but let me tell you – nothing could be further from such an assumption – The Vaults is a lively theatrically thrusting, bold and diverse venue offering Londoners radical and thought provoking entertainment.

A comic telling of the reimagined events, when capturing and exhibiting, King Kong, is presented by a cast of 5, who play a selection of parts with vim and vigor. They roar their way through their tongue in cheek performances with such knock-about likeabilty, that the audience is enthralled in laughter. At last, truly a production where the audience does not want an interval! 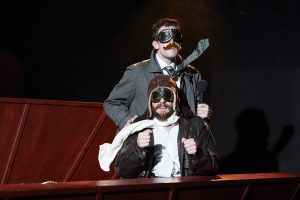 The panoply of characters range from theatrical directors, to sea captains with dodgy accents, smarmy reporters, waiters, one legged chancers, an aspiring actress with an intelligence that belies her good looks and of course a gorilla; one that is hunted, captured, exhibited – slain. Jokes come thick and fast and the company maintains a heightened style that allows for mock interest and feigned valour. All are trying to hide the fact that everyone is in it for themselves. However, there is pathos too amongst the fun and frolics and much to the credit of the company the sequences with Kong are strangely moving – but not for too long – after all there is a comedy to get on with.

The idea of the token guy, who is of no consequence to the plot, is typical of the inspired comic moments in this production. With puppetry business that references a rumble in the jungle and O’Mally’s fast taking hand puppets, with generic New York accents the audience share the absurdity of it all – it’s all generic – it is all recognizable good fun. The audience is increasingly encouraged to share the joke with oos and ahs and eventually with call out responses to ‘I’m ok’ the crowd called back ‘he’s ok’ with some hilarity. Indeed they are right – he is ok and so is the entire production.

Directed by Owen Lewis, who has kept the piece fast moving and steered it on the side of the ridiculous made sane with some seriousness. This of course only adds to the fun. Of course the writer Daniel Clarskson is having a laugh and he knows lots about sustaining a silly idea and making it inclusive. With sharp gags, slap stick, innuendo and banter the script keeps bubbling along right to the end. It is a real laugh and great night out, especially if you are with a group of mates.

The King Kong creative team nailed it in this space with their cinematic lighting and sound effects. However, the set and props have to take the plaudits. Simon Scullion’s imaginative box-file style set design lends itself to this madcap humour, where it can allow actors or puppets to pop up at different levels to shock or surprise us. If a set can be funny this is it.

Enjoy this comedy and rush along to The Vaults.