A brilliantly funny, but ultimately thought-provoking account of how two outsiders took over The Sun and made it the country's biggest circulation newspaper. James Graham has written a play that is equally as good as This House. Unmissable.

It is 1969, and Hugh Cudlipp wants to get rid of The Sun, a broadsheet newspaper that is failing, with a circulation dwarfed by its sister paper the Daily Mirror. Enter two archetypal outsiders. One shunned by the establishment for trying to enter into the protected environment of newspaper ownership, the other a former employee of the Mirror, who has retreated to the regions, frustrated by his inability to overcome a northern background and the lack of a university education. This play gets to the heart of how and why Rupert Murdoch, having recruited Larry Lamb, took on the press hierarchy and won.

James Graham’s latest play, superbly directed by Rupert Goold, is both genuinely funny and thought provoking. Scenes where Lamb recruits his new editorial team and how they brainstorm a new format and content are hilarious, but very effectively convey how Lamb changed the approach of giving readers what papers thought they should read, to what they really wanted. Equally, Graham does not ignore the dark side of the process, both when the paper becomes the story (with the kidnap of the Deputy Chairman’s wife) and the apparently desperate move to bring nudity to page 3.

Graham had a huge success in 2012 with This House, which brilliantly captured the electoral machinations of the 1970’s (which has proved particularly apposite given the current hung parliament), and his portrayal of the great change in the delivery of news is equally timely. Newspaper production was an antiquated process and here we are shown both how the unions restricted progress and how Murdoch and Lamb made seminal changes. While we know the outcome, the suspense created by the progress of circulation figures is compelling, and the use of song and dance to develop the narrative never allows the audience’s focus to drift. 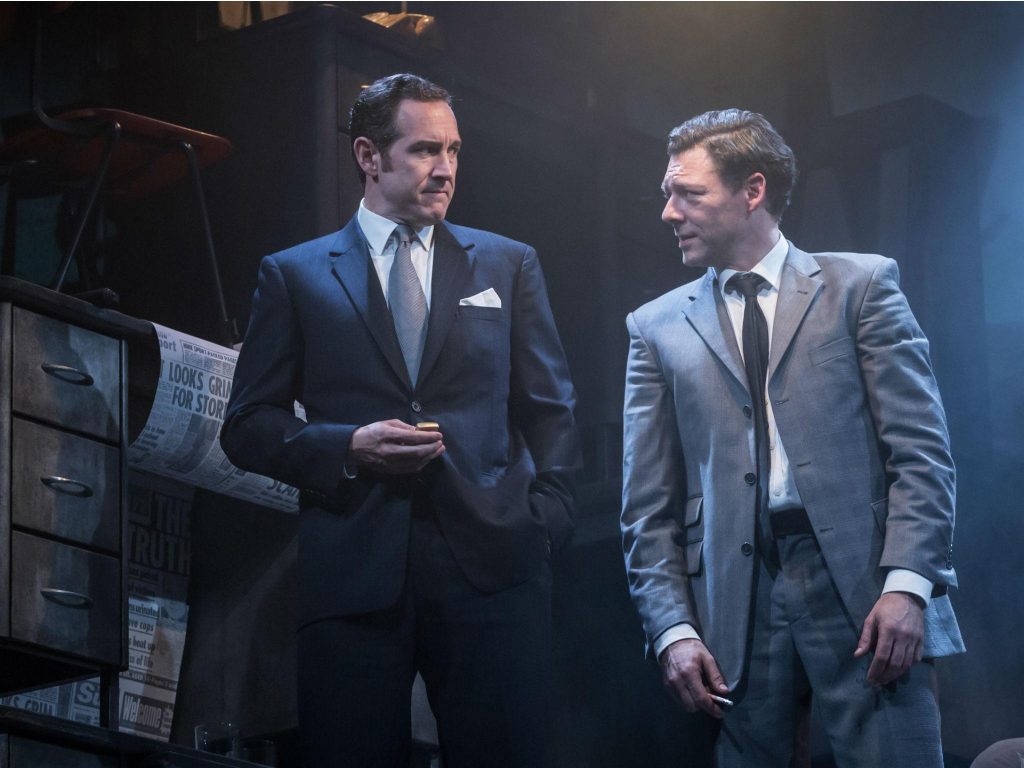 The central characters are well cast, and the performances perfectly observed. Bertie Carvel as Murdoch is a suitably diffident, impeccably dressed outsider, shunning the limelight but relishing the profile, while Richard Coyle as Lamb gets us on his side in the battle with the old guard but leaves us questioning his “circulation at all costs” approach. The set (which may be a health and safety minefield) has been designed to help us realise the Heath Robinson nature of the old process and the limited resources that Lamb had at his disposal.

Ultimately James Graham may have delivered something more than just an account of the last centuries biggest media epoch. He may also have exposed how the press came to command too much power. Social media is now challenging this position, and the latest political drama demonstrates the extent to which the popular press has lost its punch. It was a short step from the events of Ink to a Sun headline that read, “It’s the Sun what won it” in the 1992 election – but that path would now seem to have begun its reversal.