Review of: The Hunting of the Snark

An upbeat energetic ensemble production blending puppets, pottiness and poetry into a musical comedy for all the family.

This tight ensemble touring production has landed in the West End to entertain the kids with its unique brand of bonkers over the summer holidays. It tells the tale of a motley crew of explorers and their quest for the mythical beast ‘The Snark’.

As an adaptation of Lewis Carroll’s 1874 nonsense poem, the main drawback for a young audience is its lack of recognisable characters (which is the pull of shows like The Gruffalo and What The Ladybird Heard) and its challenging plot. However the simple humour and clever songs are ample compensation. 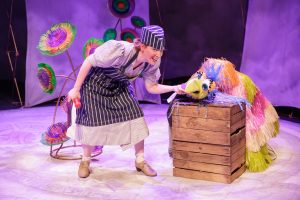 The cast of five take on the main characters of The Boy (Jordan Leigh-Harris), The Banker (Simon Turner), The Bellman (Ben Galpin), The Baker (Will Bryant) and The Butcher (Polly Smith). Bryant also plays a wonderfully camp Bandersnatch, a character that collects things on Snark Island (including at one point the Boy), while Galpin is responsible for some excellent puppetry in his manipulation of the Jubjub bird, which is like Emu in a grass skirt.

Although the main throughline in Annabel Wigoder’s adaption is the search for the Snark by the motley crew; the thread the audience hangs onto is the relationship between The Boy – an accomplished debut by Leigh-Harris whose high voice conveys the youthfulness – and The Banker, his father. At the start of the show Turner’s suited Banker cares only for money, treating his son’s education with nonchalance saying “you don’t need brains if you’ve got money”. However when he loses his son on Snark Island and fails to buy any support with cash – which the Jubjub bird points out is only paper – then he begins to realise what is important after all.

The other characters have more tenuous transformations such as the Baker realising at the end that he is really the ship’s captain (a role he had played earlier in the show). The jokes are suitably boom-boom with a dancer at one point being asked how flexible he is and replying “I can’t do Tuesday night”, and other language play like ‘desert island’ being rhymed with ‘desk in Ireland’. But the main thing that keeps the audience engaged is the sheer energy and gusto with which the play is performed by a very hardworking cast.

The music and lyrics are by Gareth Cooper, who is also an actor and comedian, but is making his West End debut as musical director for this run. The songs are fun and upbeat and come thick and fast – eight musical numbers are squeezed into the 80-minute show – although you don’t leave the theatre humming any particular tune. The show would have benefited from a little more musical repetition to get the little ones toe-tapping – in fact the audience were at their most animated at the curtain call when they were encouraged to clap along. Some of Carroll’s writing appears in the lyrics, although remains nonsensical – “just like a raven and a writing desk we are the best double act in history” the Boy sings to the Beaver at one point.

The set is elegantly designed by Justin Nardella with canvas mast-like flats used to shape the performance space and to receive projected silhouettes of the London skyline. A large blossom tree centre-stage changes colour throughout the show and a random selection of lightbulbs hang above it. Once on Snark Island the colour is really unleashed with vibrant acrylic Triffid-like flowers and a jolly crochet skirt for the trouser-less Banker, ostensibly knitted by their Beaver companion (a cute puppet that is ably handled by the whole cast).

Although billed as a comedy musical adventure for 4 to 94-year-olds, the very youngest members of the audience may find it a little long and my four-year-old struggled a bit to follow what was going on. I’d say it is perfect family entertainment for anyone six and above.