Review of: The Ugly One at the Park Theatre

Ten years ago, Maja Zade’s adaptation of Marius von Mayenburg’s social satire The Ugly One debuted at the Royal Court, a vivacious dissection of how body image, ‘attractiveness’ and our obsession with external beauty. In that time, as the Park’s programme notes, social media has flourished (Facebook based, after all, on an algorithm originally designed to compare two different women on how ‘hot’ they were) leading to the likes of Tinder, Bumble (now daubed over London busses), or even the filter-glossed sheen of Instagram.

The Ugly One tackles these issues with head-on force – we meet Lette, the titular ugly, repulsive figure, encouraged (read: forced) to undergo surgery to remedy such a terrible affliction. Now blessed with a strikingly handsome face (much to the delight of his wife and, later, Lette’s own libido) the man navigates his way through a world where his very image is revered, commodified, imitated and manufactured. The bright face of modern day consumerism, here predicted well before it has manifested itself in a social media form.

Body image, attractiveness, issues of this nature are a snug fit for the stage – performative spaces, where individuals have to ‘put on’ expressions, wear their characters. The Ugly One takes this to the next level – Lette’s ‘transformation’ is never seen by the audience, he looks exactly the same both before and after the operation. The beauty is an artifice, a collective construct. Setting the show in the round is a neat stroke here (aided by the expansive, multifunctional slab from designer Loren Elstein) – we are all colluding in this endorsement of beauty, as pivotal to its existence as any actor on the stage. It’s a Saussurean exercise, where the signifier is rendered irrelevant due to the content of the signified. A damning inditement of modern questions of identity.

The influences are explicit here – Churchill being an obvious one (particularly in the later scenes), a modern day Ionesco or Kafka-esque notion of transformation also key. Characterisation is dialled up to 11, the absurdism reflected in individual strokes or reactions. It’s an incessantly comedic piece, and all the better for it – satire always has to straddle a line between meaningful insight and dripping mockery.

Director Roy Alexander Weise, 2016 JMK Winner, turns the show into a barn-storming four hander, maintaining an inexorable and tireless pace for the ninety minute runtime. His flourishes are neat, entirely in keeping with the show’s premise (the experiment on Lette’s face, for instance, is depicted with excruciating audio as the ‘surgeon’ cuts apart slices of fruit, then played through a microphone and out into the audience) – having characters constantly peeling away fruit skins, or the way in which the multi-roling blends seamlessly into scenes bouncing from one context to another. Special mention for Amy Mae’s lighting design here – subtle shifts demarcating environments and tones are the order of the day – all the more vital in a 90-seater space. 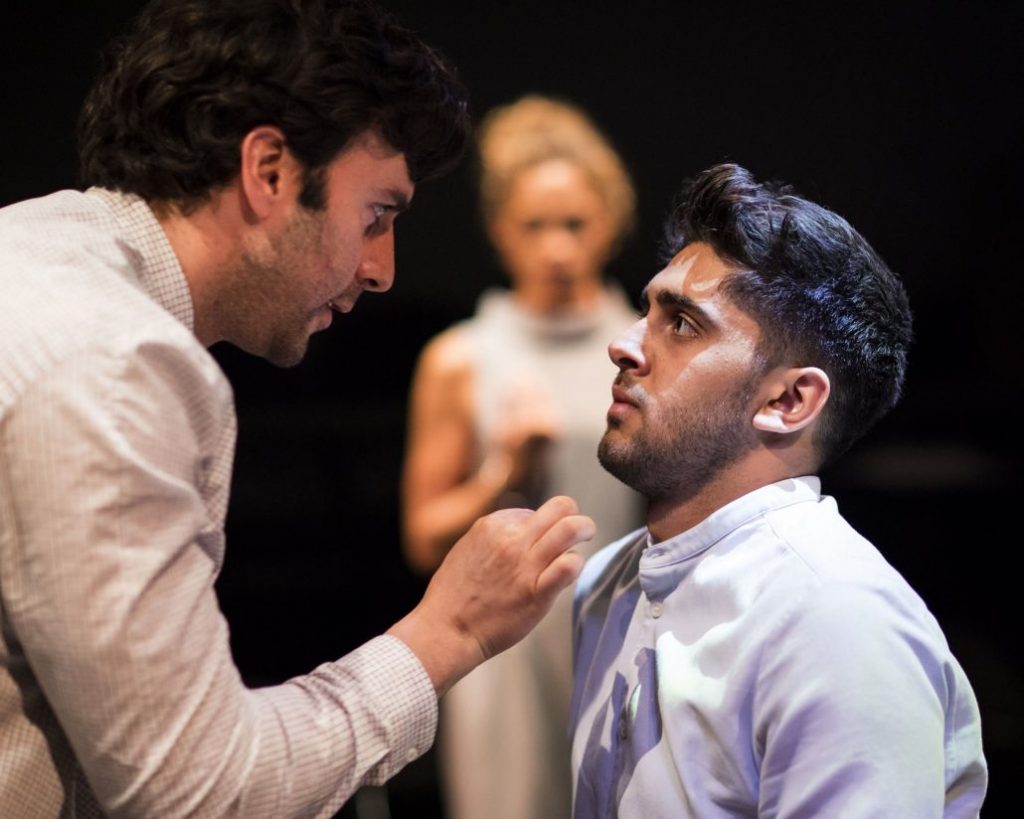 Zade’s adaptation feels somewhat protracted in places – quite easily reducible to an hour if some scenes were cut apart or simply pulled away (much like Lette’s face, perhaps). The conceptual stimulation can only last so long – there needs to be pertinent scenes laced beneath it to further the discussion. For example, a scene towards the end of the play, where Lette comes to be deeply attracted to his own image, is a fantastic turn – a perverted depiction of self-love (something that, in this social media age, we are all encouraged to find). It was just a shame it took a while to get there – in this case a monologue set in an elevator, supposedly frenetic but here just slightly tiresome.

On the acting side of proceedings we see some terrific turns from Charlie Dorfman, reflecting the intense absurdity of Lette’s predicament and the ensuing psychological transformation. How intrinsically can one’s self image permeate through their overall identity? A suitably apt question to chew over. T’Nia Miller is a wonderfully disciplined Scheffler, the first to bring up the body image issue and then later placed in the positions of power that exacerbate and catalyse Lette’s role. Indra Ové is given something of a lesser role to play than the rest – Lette’s wife rarely gives her a position to evolve or develop, constantly a source of both antagonism and satisfaction for the other characters.

The Ugly One is a funny show – it whips along in a way that holds a garish mirror to our narcissistic modern world while giving us every opportunity to laugh at the absurdity of the situation. Though Zade has padded the show with some scenes that disrupt a punchy flow, Weise keeps it ticking along with a whizz.