Review of: Twitstorm at the Park Theatre

Twitstorm's success hinges on its believability, and this is where it falls resoundingly flat

Twitstorm is the sort of show that sets out to interrogate liberal prejudices, exposing social paradoxes among those who deem themselves tolerant, especially those identifying with left-of-centre opinions and outlooks. It’s meant to cut to the core, or as director Jonathan Lewis puts it in the programme,  defeat the ‘guardians of PC’. A bold mission statement, and one that can sometimes prove incredibly harrowing – in shows other that this however.

To give Twitstorm the credit it deserves – it’s on to something important. When a middle class white man, a successful TV presenter, says a certain word in the context of his own home, only to then see it tweeted out to hundreds of thousands of people, it certainly raises immediate questions about blurring the line between private and public, where even those responding in outrage can be shrouded in anonymity. It’s the sort of issue covered with an infinitely greater amount of success in Jon Ronson’s So You’ve Been Publicly Shamed.

We are treated to Guy Manton, the front face of an outspoken BBC show – imagine a mixture of Top Gear and Last Week Tonight (though seemingly filmed on the set of a broom cupboard next to Dragon’s Den). Due to a series of misunderstandings with a radically stereotypical lodger Ike (a refugee who spontaneously turns up on the Manton’s doorstep),  Manton induces the sort of controversy that has, in the last 24 hours, managed to happen to an American chat show host  (Bill Maher and Guy Manton were two privileged and short sighted peas in a proverbial pod, it seems) then having the somehow recuperate his public image as a result.

Twitstorm’s success has to hinge on its believability, and this is where it falls resoundingly flat. Attempts a  social commentary are utterly eviscerated by flawed character development, sloppy execution and writer Chris England’s clunky dialogue. Manton’s treatment of his wife, he capable of insulting her life’s work without any inhibition, makes the central relationship completely unfathomable, while the final shootout (yes, an actual shootout) blows the lid off any form of didacticism at work. The piece simply antagonised, picked up interesting issues and then waved them around like a frustrated toddler.

The sloppiness extended to the vital element of the show – the tweeting itself. Projected onto a back screen, these live stream tweets felt clunk and entirely inaccurate (an empty tweet displaying 88 characters, rather than 140) and in an insulting turn of events, someone managed to make a hashtag with spaces in the middle – #just like this. Even Manton’s show looked like a novelty YouTube channel rather than a nationally treasured hit, filmed in harsh, overexposed light – from the first line instantly undercutting the show’s veracity. 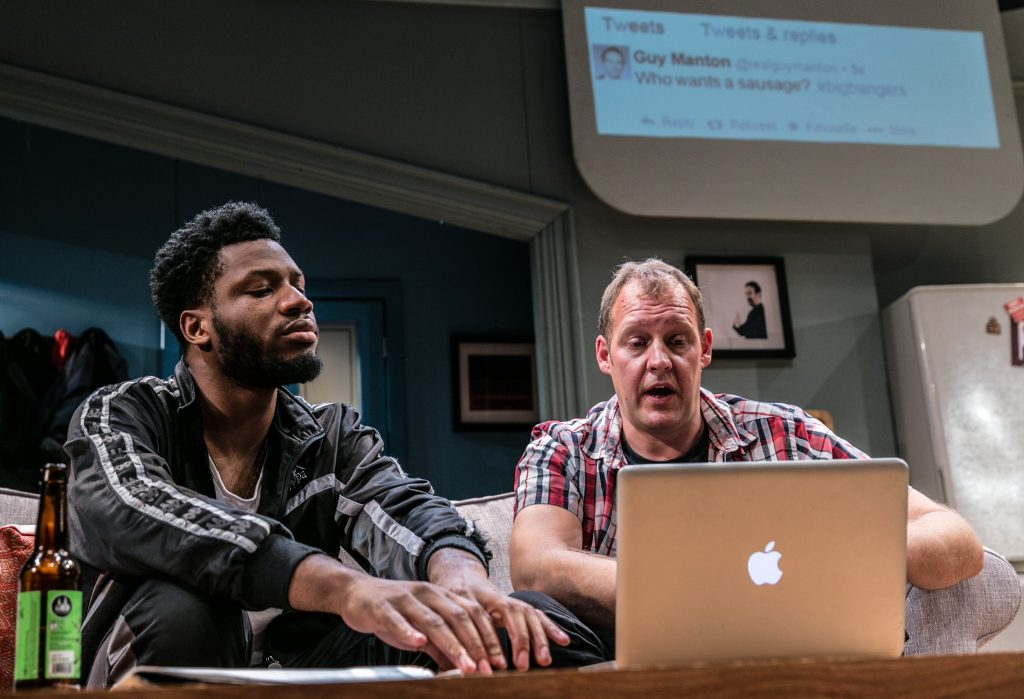 Chris England, a privileged white man, has done a lot of thinking and come to the conclusion that there are bad things in the world – social media included. While there’s a shred of truth underpinning the issues, his attempts at comedy resulted in a largely muted audience reaction, while the jokes themselves trivialised every shred of the discussion. Play the show straight and cut out the humour, reflect on these genuine issues and how they can have paradoxical impacts. Then the message can get through.

I’ve been itching for someone to make a show about social media work onstage, but that’s not the case here. If the show had ended with Manton’s demise, his complete lack of comprehension about the nature of the modern world, the parable would have had Miller-esque shades of importance. England oversteps the mark, slapping in twist after twist until the show ends up as a baffling series of frustrating skits.

The internet is a sea of conflict, and attempting to decipher this cogently can rarely function without an intense sense of discipline and clarity. The only thing that grates more than this is a continued obsession among some playwrights with the idea of ‘PC’ – an early noughties term that now feels so woefully outdated.

It is worth clarifying, I’m not offended with Twitstorm due to its content, or the questions it raises (some of which I know I will dwell on) but instead due to the terrible execution. An opportunity entirely missed.