One of the most piercing and joyous shows ever to have been presented on the boards of a stage. Ever.

I confess, when my mother made a 12-year old me sit through the Tommy film late one evening, I was less than impressed with what I perceived to be a clearly confused and completely bizarre piece of musical theatre. Fast forward rather a few years and I find myself leaving the Theatre Royal Stratford East snotty-nosed, teary-eyed and sit in a daze the entire tube journey home, trying to get my head around what I just saw. Oh My God, what a show. 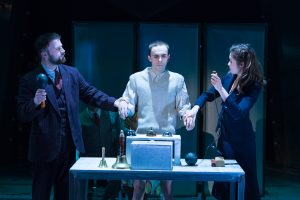 It was, quite simply, stunning. A mix of signing, singing, captioning and speaking drove the action relentlessly up and around plot points charting the life of Tommy, a ‘deaf, dumb and blind kid’ whose ability with a pinball machine leaves everyone in his community lost for words. The various methods of communication, while usually all provided for understanding’s sake, also ended up being a hugely powerful theatrical device which director Kerry Michael used to direct the audience’s focus and to provide commentary from one scene to the next. Disembodied hands lit by an angler-fish-esque headtorch provided a spine-crawling signing translation for Gary Robson’s (Uncle Ernie) ‘Fiddle’; William Grint (Tommy) and Donna Mullings (Nora) were left signing alone onstage with all captioning cut off in one of the most profoundly moving moments of the night. Tommy provided such a fantastic example of working BSL and other methods into the creative fabric of the show rather than asking a BSL interpretor to stand at the side of the stage, completely removed from all emotion and action. It catered to its audience in a such a way that we never felt patronised or patronizing, just hugely and intensely grateful to be able to witness a cast and a production team that utterly dedicated to the telling of a story.

And, my god, what a cast they are. As mentioned above, Grint and Mullings shone as Tommy and Nora respectively, with Max Runham and Alim Jayda (Captain Walker and Frank) completely nailing what are two intensely difficult roles. Huge admiration must also go to those cast members supporting the principle characters either vocally or signing. Natasha Julien’s performance as the signer to Peter Staker’s incredible Acid Queen rocked my world; Shekinah McFarlane, Julian Capolei and Matthew Jacobs-Morgan completely steal hearts as the respective voices of Nora and Tommy. The entire ensemble is so damn talented it remains completely impossible to give enough praise to each of them individually – not only have these people voices and moves to rival gods, but the vast majority also casually pick up instruments throughout, bust out a tune and then go back to the scene as if nothing had happened.

Even in the first minute, it becomes hugely clear that this is in no way a ‘pity play’. There is no ‘despite’ in this production – that it is amazing ‘despite’ the disabilities that many of the cast possess. It amazing because the cast and musicians are so utterly brilliant that they’ve made me rethink what I can give a five-star review to from now on.

This production took what is a hugely problematic musical and completely flipped it on its head, creating one of the most piercing and joyous celebrations that has ever been presented on the boards of a stage. In this world where (as the production points out) America elects a baboon who openly mocked a journalist with disabilities on tv, and we in England find ourselves in the midst of a social care crisis affecting the most vulnerable in society, this is not just theatre. It reads like a battle-cry as much as a play.

I need to stop now (my word count demands it) but trust me, I could go on. Genuinely the best show I’ve ever had the honour to see. Sell your soul, your siblings, your house for a ticket.