MIKEL MURFI, best known perhaps for his performance in Enda Walsh’s Ballyturk at the National Theatre alongside Cillian Murphy, returns to the Tricycle Theatre with his new solo show I Hear You And Rejoice – the follow up to The Man In Woman’s Shoes, which sold-out at the Tricycle last year and also returns for a limited run this June. Both shows feature Murfi’s creation Pat Farnon – a mute cobbler who in The Man In Woman’s Shoes walks five miles to town in a pair of woman’s shoes he is to deliver – as well as a host of other characters all portrayed by Murfi. The shows combine the versatility of Murfi’s Lecoq training and the voices of rural Ireland he has met on his travels.

The Man In Woman’s Shoes performs on the 9th June and then every Saturday Matinee until 1st July.

I Hear You And Rejoice performs from the 10th June till the 1st July. 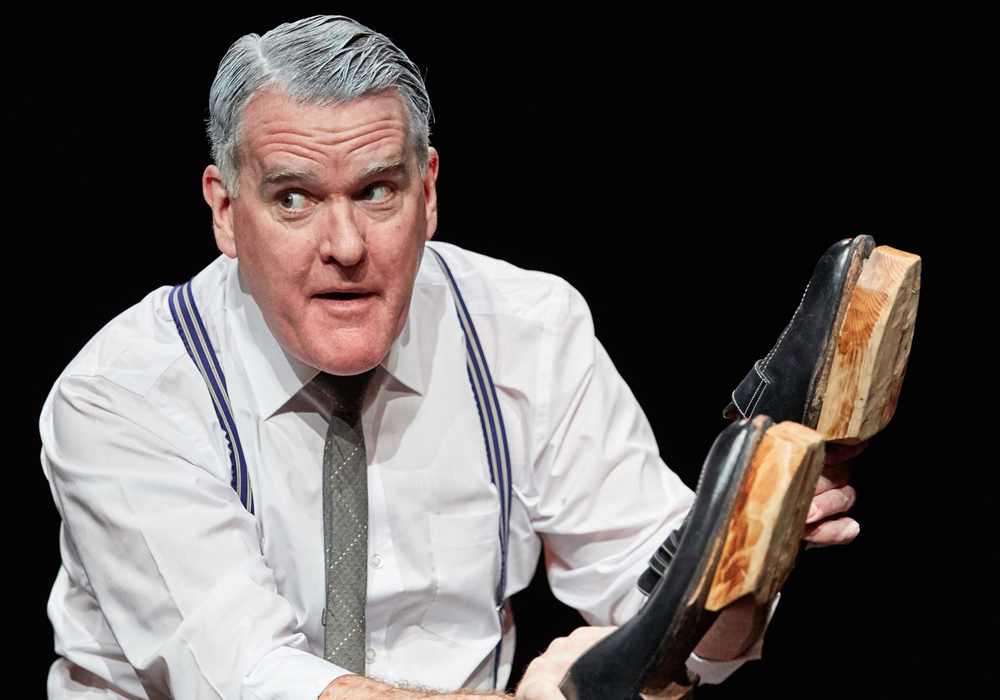 TB: What made you decide to return to the character Pat Farnon, who you first created in The Man In Woman’s Shoes?
MM: I returned to him because I’m very, very fond of him. That’s the long and the short of it really. He’s a really lovely man! As an actor, it’s like getting to meet your favourite uncle, every night of the week. And without giving anything away – because I’m playing both shows while I’m at the Tricycle this trip – I think folk who had seen Pat on his journey first time out, were wanting to see what happened next in the life of this gentle, funny, man. Also, I felt I had a responsibility to the old folks groups that I had been meeting as part of my research for the pieces – to talk about a particular subject that was keenly part of who they are at the moment.  So, I made I Hear You And Rejoice. The pieces stand alone though, so you don’t need to have seen one to see the other!

TB: You once called The Man In Woman’s Shoes “A Road Movie, At Walking Pace”. Having sold-out the Tricycle last year, and received rave receptions in Dublin and New York, what about this slow tale do you think appeals to modern audiences? Have audiences responded very differently?
MM: So, the second part of the question first … The audiences haven’t reacted that differently at all really. I think every culture, every place, has their elders, their people who may be seen to be disadvantaged, their comedians etc … The shows have a kind of an old school charm about them … they’re sentimental and joyful and hopeful and their popularity I think, stems from the fact that there’s a sense of authenticity and simplicity about the characters. And yeah, in The Man In Woman’s Shoes, Pat Farnon walks, yep, walks, 5 miles to town. And that pace is reassuring I think … we all really appreciate our slow time these days … so, for some reason, this old guy walking to town appeals I think to people’s need to ‘slow it down a bit’ from time to time, to breathe. The authenticity I think, comes from the beautiful people I met when I was researching the works. I think their spirit is very evident in the pieces … I was just writing to try to reflect back to them who they were to me.

TB: What inspired you to train at Ecole Jacques Lecoq, and how has its pedagogy influenced how you create your solo work?
MM: As a young fella in Ireland with no clue what he wanted to do with his life I was lucky enough, after doing some theatre in college, to be offered a job in TV in Dublin. I was being paid to act – professional acting. So, I thought maybe I should do some acting training in case I get offered more stuff. At the time a friend of mine was studying in the Marcel Marceau school in Paris and that sounded very cool. But he knew me, better than I did myself. So, he recommended Ecole Jacques Lecoq because he figured it would suit me better, that it could look after my comedic leanings. He was right. I think the Lecoq pedagogy makes you attend to every facet of physical performance. It makes you keenly aware of the ‘text of the body’ and the “sub-text of the body’ and having the physical vocabulary, that the school gives you, at your disposal, it makes the creation of solo pieces easier I reckon. It has to do with the confidence you have in your ability to switch from character to character in the blink of an eye because you’re happy that your audience is sophisticated enough to see everything you show no matter how fast you show it. And the Lecoq ethos makes directors, writers, designers and actors of us all so you have quite a lot learned when you leave there and that helps when you face into solo work. You’re able to build the piece from every angle.

Buy tickets for The Man In Woman’s Shoes here and for I Hear You And Rejoice here – both performing at the Tricycle Theatre.